Korea, the mecca of green growth

Korea, the mecca of green growth 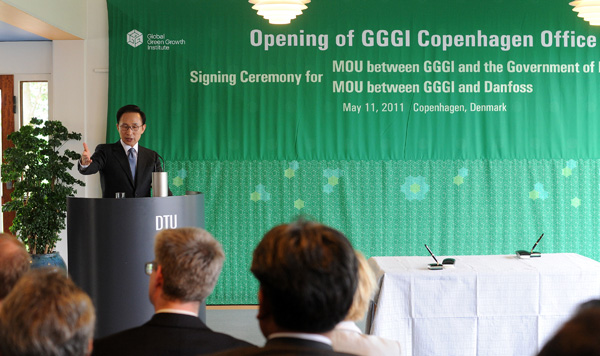 Last week, I attended the sixth World Economic Forum 2012 Summer Davos in Tianjin, China. One of the forum organizers greeted me with a compliment. He said I must be very proud that the Global Green Growth Institute (GGGI), a collaborative project by the Korean government and the World Economic Forum, has established itself as an international organization.

Since “green growth” is negatively associated with ideas such as the “four rivers” project and the expansion of nuclear power plants, you may find the comment not flattering. The GGGI was controversial for the same reason. Not so long ago, the Democratic United Party’s Hong Ik-pyo said that the institute was “an overall insolvency of slack budget operation, slow business execution, accounting book fabrication and a waste of budget.” He urged to clarify all the speculation even if it would take more time for the institute to become an international organization. Of course, the institute needs to clear its suspicions, but I disagree with any delay in turning the GGGI into an international organization.

In fact, the Lee Myung-bak administration’s foreign policy objective of “global Korea” produced marginal success. International events such as the Group of 20 summit meeting or the Nuclear Security Summit were led by the United States, and it was Korea’s turn to be the host. However, the GGGI project is different. The Korean government came up with the idea, took initiative in creating an agenda in the international community and established a new international organization with financial assistance from other countries. Now, this is a great diplomatic accomplishment.

When the Lee administration first proposed the agenda of “Low Carbon, Green Growth” in August 2008, the idea garnered a lukewarm reception at home and abroad. The dominant understanding was that growth requires resources and energy, and therefore would exhaust resources and negatively impact the environment. The Korean government took leadership by proposing a new paradigm of green growth when the Western world was neglecting the issue.

The outcome was the Establishment Agreement to convert the GGGI into an international organization signed at the Rio+20 Climate Conference on June 12. The goal is to seek a balance between growth and environment through the development and sharing of advanced technology to end poverty, create jobs, integrate societies and attain sustainable environmental preservation. The organization will also work as a bridge between the developed and underdeveloped countries as well as the public and private sectors.

The Korean government did not stop at merely coming up with the idea and went further to create an international agenda. Starting with the members of the Organization of Economic Cooperation and Development, Korea consistently expressed the importance of green growth at multilateral meetings such as the United Nations, Group of 20 and APEC, as well as at numerous bilateral meetings.

The cooperation with independent organizations such as the World Economic Forum led to participation of global entrepreneurs and businessmen. Denmark and Guyana have already submitted the letter of approval for the Establishment Agreement, and the United Arab Emirates, Norway, Qatar, the Philippines, Costa Rica and Ethiopia are expected to approve it soon. Undoubtedly, the Korean government’s efforts to persuade countries to share the same vision are paying off.

Let’s take a moment to review the financials as well. In the past, Korea has been itd their dues without exercising its rights. However, for the GGGI, seven countries, including Denmark, the UAE, Australia and the U.K., promised an annual contribution of $5 million over multiple years. Japan and Germany have already contributed a portion of their official development assistance to the operating budget of the organization. Private companies have also provided funds. It is rare to receive funds to operate an international think tank.

The greatest gain is that Korea is highly likely to become the international stronghold of green growth in the long run. The GGGI would have a positive influence on hosting the Green Climate Fund in Korea, pursued jointly by the Ministry of Strategy and Finance and the city of Incheon. If the Green Climate Fund, which is considered the International Monetary Fund of the 21st century, selects Korea as its headquarters, an international organization with 1,500 employees would be established in Songdo. Then, Korea will be the mecca for green growth.

The GGGI is a diplomatic accomplishment that should be made into a manual for future reference. The National Assembly needs to ratify the establishment agreement with no further delay. The organization will surely become a national asset transcending factional interests. If it becomes a political issue and ratification is delayed, we must remember that it is our loss.

* The author is a political science professor at Yonsei University.