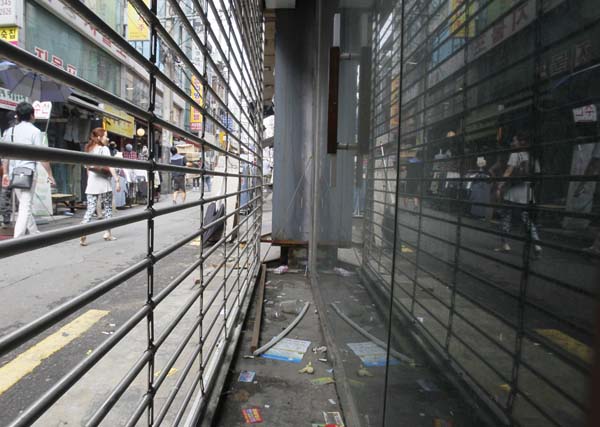 Experts are calling for changes in the government’s policy on how to deal with an increasing number of debt-stricken self-employed people.

Most of the government’s measures are focused on providing financial support for people who plan to set up their own businesses, experts point out. However, the amount is usually insufficient.

The experts say lowering taxes and insurance premiums would help self-employed men who struggle to make ends meet with loans, which has helped inflate the country’s household debt level.

“The government needs to renew policies that make self-employed people happy as a way for the Korean economy to become healthier,” said Kim Yong-ha, a business professor at Soon Chun Hyang University. “What poor self-employed men want is not financial support but a reduction in unnecessary expenses like taxes and national insurance premiums.”

Last week, the Bank of Korea said it will release 1.5 trillion won ($1.3 billion) to commercial banks to extend more loans at low interest rates for small merchants and business owners from next month. It is the first time the central bank pitched in to the government’s support for self-employed people.

Under the plan, small merchants earning less than 45 million won a year and with poor credit histories will be able to convert high-interest loans from consumer credit companies to loans from banks with interest rates between 8.5 and 12 percent. The average interest rate of loans taken by small merchants with bad credit histories is 40 percent a year, according to the BOK. 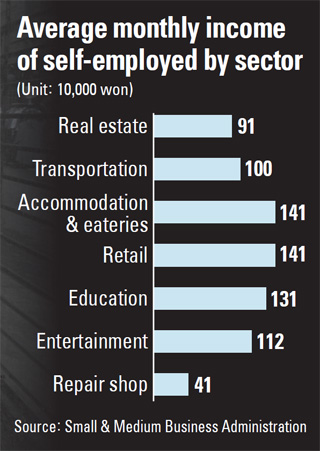 They will now get access to up to 30 million won in cheaper loans.

The government predicts about 150,000 self-employed people will benefit from the plan. The amount of total interest to be paid by beneficiaries of that plan is estimated to be 135 billion won for the next six years.

Critics say the help of the central bank still isn’t enough and is somewhat misguided.

“Regardless of the size, the plan is misguided, because it would only aggravate the household debt problem rather than actually help out 7 million self-employed,” said Kim Kwang-seok, a research fellow at Hyundai Economic Research Institute.

The number of self-employed reached 7.2 million as of last May, the highest number since 2002, when many Koreans were laid off and set up their own stores or businesses after the 1997 Asian financial crisis.

Minister of Strategy and Finance Bahk Jae-wan said the latest plan is targeted at a small group of self-employed people who are in deep financial trouble.

“The plan will serve as a breather for those who are suffering extreme difficulties,” Bahk said.

“Due to poor sales, we take out more loans to pay taxes and other mandatory expenses, which makes it impossible for us to repay our debt,” said Yang Jeong-seok, who owns a pork cutlet shop in Poyi-dong, southern Seoul.

He complained that the biggest headache is paying the value-added tax (VAT).

“I barely take home 2 million won as my monthly net income, but have to pay more than 500,000 won in VAT twice a year, and it’s not the only tax,” Yang said. “We also have to pay regular income tax.” 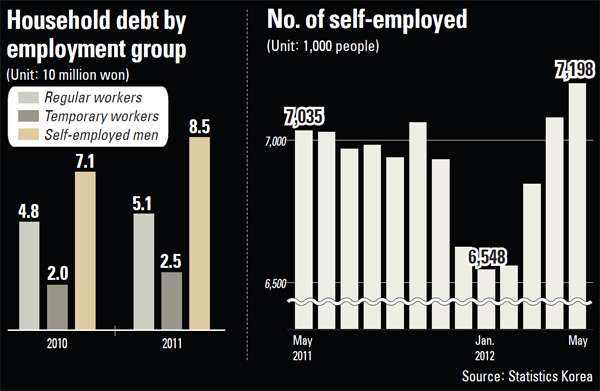 As part of its working class-friendly policies, the finance ministry said in August that it will cut the VAT rates for small businesses owners who earn less than 48 million won in annual sales to between 0.5 percent to 3 percent from the current 1.5 percent to 4 percent from next year.

Businesses whose annual sales exceed 48 million won must pay 10 percent of their sales as VAT.


However, Yang said the rate cut will only help a small number of businesses. “The minimum sales standard for the lower tax rate is unrealistic because most self-employed men exceed that level, which is the lowest level for survival. So many poorer businesses are paying the same VAT as large merchants do,” he said. He urged the government to raise the level for the lower VAT rate to 100 million won.