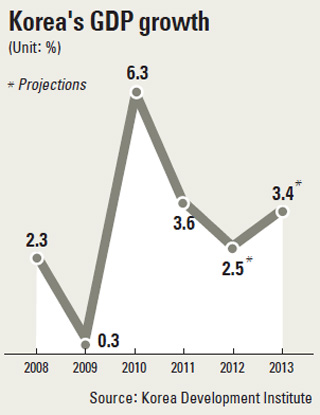 The latest growth projection is far lower than the 3.6 percent expansion that the Korea Development Institute (KDI) forecast in May. It is also much lower than the government’s 3.3 percent growth estimate for this year.

“We expect that the economic growth rate will fall to 2.5 percent this year as both export and domestic demand growth appear to be slowing down significantly in the wake of the euro zone fiscal crisis and heightened global economic uncertainty,” the think tank said in a report.

The KDI, however, painted a relatively bright picture for 2013, saying that the economy will grow 3.4 percent next year as trade conditions will likely improve thanks to slow but steady global growth. An appreciating local currency will also help by boosting domestic demand, it added.

The KDI’s growth revision comes as many organizations at home and abroad are poised to cut their outlooks for Asia’s fourth-largest economy.

Moody’s Investors Service, which upgraded its sovereign credit rating on Korea to Aa3 earlier this month, said its growth forecast for Korea could be cut to around 2.5 percent if the euro zone debt crisis continues.

According to the central bank, the country’s gross domestic product grew 0.3 percent during the April-June period, which is less than half of the 0.9 percent on-quarter expansion in the first quarter and the slowest growth since the fourth quarter of last year.

Sluggish exports are a major reason behind the KDI’s economic growth outlook. The think tank said exports could contract 0.9 percent this year, while imports will drop 0.6 percent.

This is in line with government export data, which showed that overseas shipments fell 6.2 percent on-year in August and their combined value posted a 1.5 percent on-year decline during the first eight months.

Private consumption and corporate investment were also cited as causes for concern, though they will improve for next year.

Consumer prices are among the few bright spots for the Korean economy. The KDI predicted the country’s consumer price growth will stabilize at 2.1 percent this year thanks to slowing economic growth and the government’s anti-inflation efforts.

A protracted euro zone debt crisis and lingering geopolitical risks from the Middle East, however, could serve as “downside” factors on the Korean economy, which depends heavily on trade and oil imports, the KDI noted.

“A delay in resolution of the euro zone debt crisis could prolong the economic slowdown in Europe, which could cause the global economy to shrink significantly,” the think tank said.