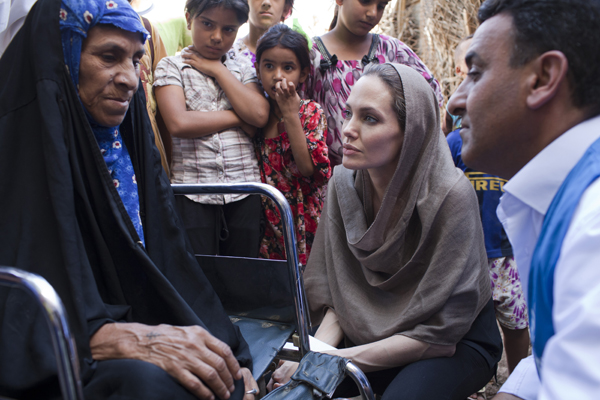 DOHUK, Iraq - Angelina Jolie on Sunday called for Syria’s neighbors to keep their borders open to refugees during a visit to a refugee camp in Iraq’s autonomous Kurdistan region.

“The most important thing is cooperation from the countries on the [Syrian] border .?.?. and to make sure these borders in all countries stay open,” said Jolie, a UN refugee agency (Unhcr) special envoy.

“I’ve been of course very encouraged to be here and hear the government speak of continuing this wonderful, life-saving open border policy,” she told reporters at the Domiz refugee camp in Dohuk Province. “I know how gracious the Kurdish government and the Kurdish region people have been to the Syrian refugees.”

According to the UN Syria Regional Refugee Response Web site, there are 25,508 registered Syrian refugees in Iraq, of which 16,833 are in Dohuk province.

The total number of Syrians who have fled the bloody civil war between supporters and opponents of President Bashar al-Assad is even greater. “With the continuation of the bloodshed in Syria, we have to all be prepared for a greater influx [of refugees], and I’m so happy to hear that the government is continuing to commit to these people,” said Jolie.

The actress, who has been on a tour of countries bordering Syria, arrived in a white UN helicopter, then traveled to the camp by pickup truck. She stepped out of the vehicle near the camp, waving to the whistling, cheering crowd of Syrian refugees that greeted her.

“I have been to the four borders of Syria, and this is the first camp I have been to where they are already preparing for winter, and also where there are ID cards, giving freedom of movement, which is an extraordinary thing,” Jolie said.

A statement on the UN agency’s Web site said she had met Foreign Minister Hoshyar Zebari and Displacement and Migration Minister Dendar Najman in Baghdad, and also met Kurdistan officials, including the region’s premier, Nechirvan Barzani.

“Combined with the new influx of Syrian refugees and the sudden return of over 30,000 of their own citizens, the complexity of the situation and the challenges for this country just emerging from conflict cannot be overstated,” the statement quoted Jolie as saying.