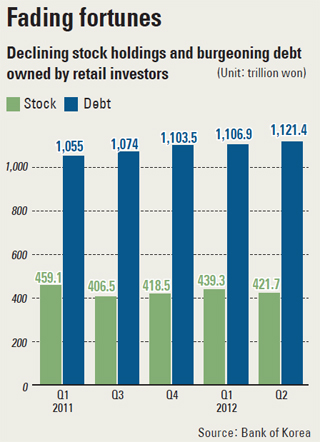 Households and nonprofit organizations, both of which classify as retail investors, racked up combined losses of almost 21 trillion won ($18.81 billion) from their stock investments in the second quarter due to the bearish market, and their debts continue to mount.

Additionally, Korean companies’ financial assets grew at the slowest rate in nine years, indicating that their profitability is being eroded by the decelerating economy.

According to the Bank of Korea, between April and June households and nonprofit organizations made nearly 3 trillion won of fresh investments in the stock market. However, the stock holdings during this period shrank from 439 trillion won in the first three months of this year to 421 trillion won.

As a result, their financial assets, including deposits, stocks and trust funds, shrank significantly from 33 trillion won to 2.3 trillion won on-quarter.

“This sort of trend occurs when household income is downsized and consumers are driven to spend, or they invest in assets such as real estate. However, due to the sluggish state of the real estate market, we can assume reduced income is the cause,” a BOK official said.

According to the Korea Exchange, the average profit rate of 10 major stocks that retail investors focused on, including LG Electronics and Kumho Petrochemical, stood at minus 18 percent in Q2. This contrasts sharply with the profit rates of foreign and institutional investors who posted gains of 4.6 percent and 19 percent, respectively, in the 10-most-popular stocks.

Market analysts say retail investors profited in Q1 but saw their fortunes change for the worse as the market fell and they decided to cut their losses by dumping their stocks.

Meanwhile, their financial debt amounted to 1,121 trillion won in Q2, up 14.5 trillion won on-quarter. Households accounted for 922 trillion won of this by the end of June, a record high.

Policy makers are struggling to curb the growing level of household debt as this is feared to impede consumer spending and crimp overall economic growth.

The business sector is also suffering.

The value of funds managed by local companies reached 2.3 trillion won in the April-June period, down from 32.9 trillion won three months earlier.

The second-quarter growth marked the slowest expansion since a 4.2 trillion won contraction in the second quarter of 2003, when the country saw a ballooning credit card bubble burst.

In the cited period, local firms amassed 20.4 trillion won from bank loans and debt sales, less than half the 53.6 trillion won they netted in Q1.

The central bank noted that a cut in facility investment curtailed local firms’ demand for funding, indicating that their performances remained tepid amid the slowing economy.