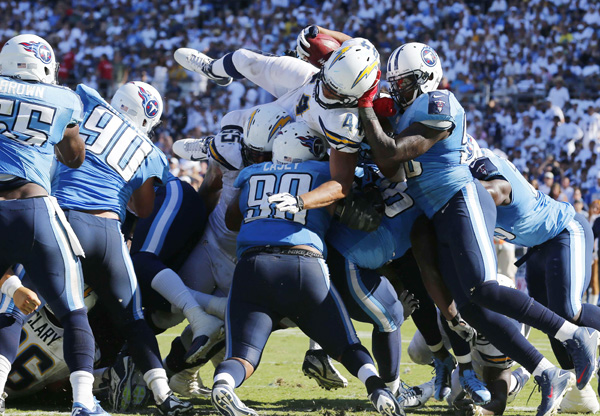 Chargers running back Jackie Battle (44) goes up and over the Tennessee Titans line during their game Sunday in San Diego. The Chargers won 38-10. [REUTERS/YONHAP]


WASHINGTON - Andre Brown ran two yards for a touchdown with 31 seconds to play as quarterback Eli Manning and the New York Giants rallied for a 41-34 NFL victory over Tampa Bay on Sunday.

The reigning Super Bowl champions bounced back from a season-opening loss to the Dallas Cowboys.

Manning threw three first-half interceptions and three touchdown passes, two in the fourth quarter. His 510 passing yards were a career high and just three yards shy of the club record of 513 set by Phil Simms in 1985.

“It’s a big win, especially with the first half, playing poorly and last week not playing well,” said Manning.

While the Giants were back in the winner’s circle, the New England Patriots and superstar quarterback Tom Brady were shocked 20-18 by the visiting Arizona Cardinals.

Brady was intercepted on New England’s first offensive play and sacked four times, but completed 28 of 46 passes for 316 yards and extended his streak to 34 games with at least one touchdown pass. That’s the fourth-best such streak in NFL history, but it proved too little when Patriots kicker Stephen Gostkowski missed a 42-yard field goal attempt with one second remaining.

In Indianapolis, former patriot Adam Vinatieri kicked a game-winning field goal with eight seconds left as the Colts edged the Minnesota Vikings 23-20. It was a first NFL victory for Colts quarterback Andrew Luck, who was taken with the first pick in the NFL draft to succeed four-time NFL Most Valuable Player Peyton Manning.

Ryan Tannehill also notched his first win, throwing for 200 yards with his first touchdown in Miami’s 35-13 victory over Oakland.

In other games, Carolina defeated New Orleans 35-27 and Philadelphia quarterback Michael Vick dived for a touchdown with 1:55 to play as the Eagles beat Baltimore 24-23.