President Lee Myung-bak is mulling over whether he should veto or accept an independent counsel probe into a corruption allegation linked to a nixed plan to build his retirement home. Concerns have been raised over the process of appointing a special prosecutor to handle the case. 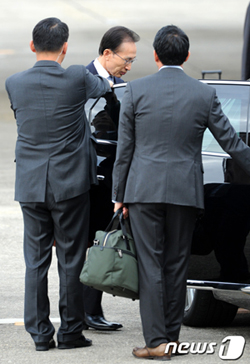 The National Assembly on Sept. 3 approved a bill to appoint an independent counsel to look into the accusation that large pieces of land were illegally purchased to build a private residence for Lee in Naegok-dong, southern Seoul.

Although the plan was scrapped after the controversy, prosecutors still looked into the case earlier this year.

Lee, his family and former Blue House aides were cleared in June, but the liberal opposition parties pushed forward a new independent counsel probe, criticizing the prosecution for having conducted a whitewash investigation.

With the approval of some lawmakers from the ruling Saenuri Party, the legislature passed the bill.

According to the current plan, the main opposition Democratic Untied Party will recommend two special prosecutor candidates for Lee to choose from. That instantly triggered concerns about the probe’s political neutrality.

Lee has until Friday to decide whether he will veto the bill or not.

On Sunday, Lee invited six experts on criminal law and the Constitution to a Blue House luncheon and discussed the legality of the plan.

Since the independent counsel system was introduced in 1999, nine special prosecutors were appointed and all of them were recommended by the Korean Bar Association or the Supreme Court chief justice to maintain neutrality.

According to a presidential spokesman, Park Jeong-ha, the experts were divided in their opinions.

“They generally showed concerns that there is a problem with allowing the DUP to recommend two candidates,” Park said. “But they have different opinions on whether it is against the Constitution or not.”

If Lee vetoes the bill, it will go back to the National Assembly for another round of voting. A veto requires a two-thirds vote to be overridden.

It remains to be seen if the legislature will be able to do so. When the bill was approved on Sept. 3, of the 238 lawmakers attending the voting, 146 approved it, while 64 voted against it and another 28 abstained. The ruling Saenuri Party controls 149 seats in the 300-member National Assembly.

Although expectations were high over the weekend that Lee will make a decision at the cabinet meeting, scheduled for today, a presidential aide said yesterday that Lee will likely take more time.

“It won’t be easy to make a decision today or tomorrow,” he said yesterday, adding that it is his personal opinion. “If no conclusion is made by tomorrow, we can call another cabinet meeting.”

The DUP yesterday pressured Lee to accept the independent counsel plan. “The ruling and opposition parties passed the bill, but the Blue House is moving so slowly to make a decision,” opposition lawmakers said in a statement yesterday.

They also said the legislature agreed to give the DUP the right to recommend special prosecutor candidates to ensure the fairness and political neutrality of the probe.

The independent counsel probe plan of Lee’s retirement home scandal is the 11th of its kind to be approved by the legislature.

While Lee still has a few more days, some observers say he will still accept the probe because of the expected political burdens on the ruling Saenuri Party if he vetoes the plan in the sensitive months leading up to the presidential election.