A move to extend the operating license of Wolseong-1 nuclear power reactor may no longer be approved after it stopped generating electricity on Sunday due to a malfunction. The reactor’s 30-year license expires in November.

Meanwhile, more controversy has been stoked after the government recently designated a list of cities that will host new power plants.

A turbine and a power supply component in one of the reactor’s generators malfunctioned at 4:51 p.m. on Sunday, resulting in the stoppage, according to the Korea Hydro & Nuclear Power (KHNP), which operates the plant.

The malfunction came two months after extensive maintenance was carried out on the plant in July.

“There is no risk in terms of the overall safety of the reactor, and there is no possibility of a radioactive leak,” the KHNP said in a release.

The power supplier said it will conduct more maintenance work to determine what triggered the malfunction before firing the reactor back up.

The malfunction came as authorities are reviewing whether to extend the reactor’s life by 10 years or shut it down as planned on Nov. 20. The KHNP submitted an application to the Nuclear Safety and Security Commission to renew the license in December 2009.

The country’s nuclear safety watchdog has declined to say when a final decision will be made. 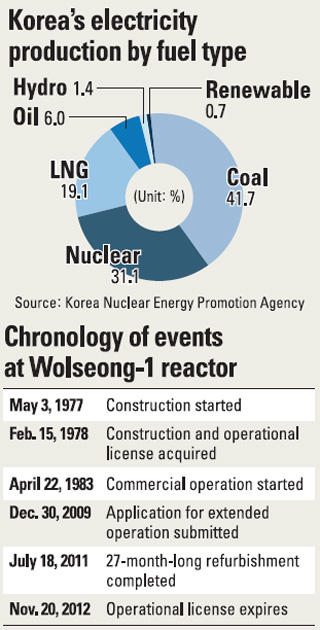 However, experts say that without it the country will struggle to meet its electricity demand through fall and winter as other reactors are also due to be inspected and possibly temporarily closed.

The newly built Shin Wolseong-2 reactor, which is located next to the Wolseong complex and was originally scheduled to start running commercially from January, may also be delayed by one month. Another reactor, Uljin-1, is due to have its operations halted later this year until June as repair work needs to be carried out.

In Korea, operators of nuclear power reactors can apply for an additional 10-year license between two and five years before they are due to expire. Of the nation’s 23 operational reactors, only Gori-1 has been approved for an extension. It was granted an extra 10 years’ lease of life in 2007.

The latest problem at Wolseong-1 has bolstered groups opposing the construction of more nuclear plants.

The Ministry of Knowledge Economy announced on Friday that it will build at least four new plants each in Yeongdeok, North Gyeongsang, and Samcheok in Gangwon. Each plant will be able to produce 1.5 million kilowatts of electricity. The exact construction period and other details have yet to be announced.

This marks the government’s attempt to stave off future power shortages in the wake of a nationwide blackout on Sept. 15 last year.

However, local environmental and interest groups are opposed to the plan, saying it was made in haste ahead of December’s presidential election.

The Committee for Opposing Nuclear Power Plant Construction in Samcheok has called on the government to kill its plan to build plants there as it goes against the wishes of local residents.