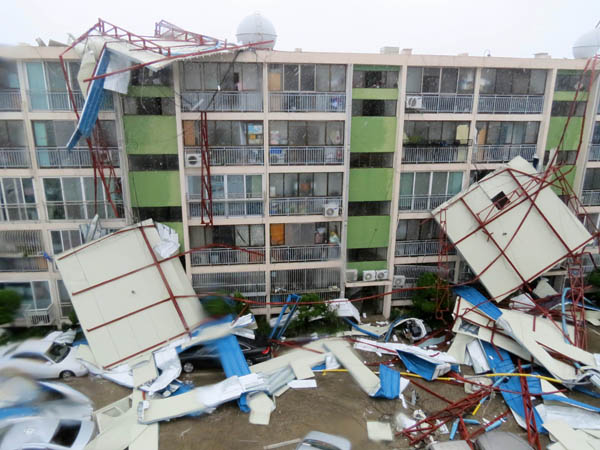 A makeshift structure on the roof of an apartment complex in Pohang, North Gyeongsang, was blown away by Typhoon Sanba yesterday as strong winds passed through the area. [NEWS1]

Typhoon Sanba made its way into the country early yesterday, bringing heavy rain and strong winds and causing yet another headache for authorities. 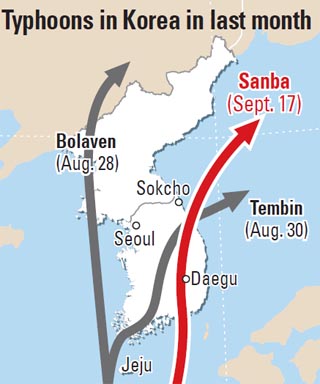 Named after an area in Macau, the typhoon, however, caused less-than-anticipated destruction in the country. It weakened as it made landfall and veered northeast up the peninsula.

The 16th tropical storm of the season hit Namhae County, South Gyeongsang, first at around 11:30 a.m. yesterday, dropping well over 200 millimeters (7.8 inches) of rain as of 4 p.m. yesterday.

Heavy rain in the southern regions led to flooded rice paddies, inundating about 1,134 hectares (2,802 acres) of farm fields with an average of over 200 millimeters of water in North Gyeongsang as of 5 p.m. yesterday. 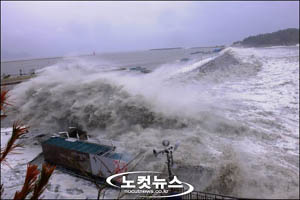 In that province, a landslide destroyed a house, killing a 53-year-old woman. Two others were injured in a separate landslide and building collapse, according to the National Emergency Management Agency.

The high amount of precipitation after three major storms has been too much for a lot of farms to manage.

“South Jeolla recorded an average of 132 millimeters of precipitation from Sunday,” said the provincial disaster center.

Residents in the southeastern province were faced with their third major storm in less than a month yesterday after Typhoon Bolaven and Tropical Storm Tembin. The two events caused 3,907 residents in the province to temporarily lose their homes, according to the South Jeolla disaster center.

“Property damage caused by Sanba is expected to be less than that of Bolaven and Tembin, as it dropped less rain and moved along the edge of the province,” said Kim Sang-yoon, an official at the South Jeolla emergency center.

In the direct path of the typhoon, however, Jeju Island had over 400 millimeters of rain between Sunday and yesterday, prompting government officials to cancel all ferry services in waters off the island.

As Sanba made its way up the peninsula, the meteorological administration placed central and southern regions, including Daejeon, Daegu and Busan, under typhoon warnings early yesterday while Seoul and Gyeonggi were put under typhoon advisories.

Local governments took preventive measures by evacuating residents from homes at risk of flooding or landslides.

The governments reported 1,187 people were evacuated from their homes by authorities as of 3 p.m.