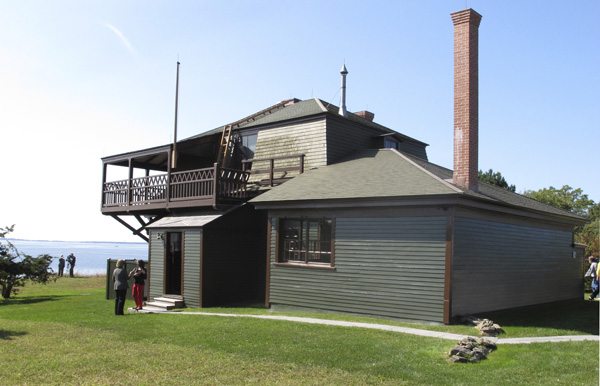 Winslow Homer’s seaside studio in Scarborough, Maine, is where the artist worked from 1883 until his death in 1910. It is opening on Tuesday to the public for tours following a multiyear, multimillion-dollar renovation by the Portland Museum of Art. [AP/YONHAP]


SCARBOROUGH, Maine - The studio where painter Winslow Homer derived inspiration on Maine’s craggy coast and produced some of his most notable seascapes isn’t heated by wood or illuminated by oil lamps the way it was in Homer’s day.

But in most other ways, the studio has been restored to what it was like when Homer lived there, from 1883 until his death in 1910, following a multiyear, $2.8 million restoration by the Portland Museum of Art.

With the renovation complete, the museum will begin offering public tours this month, giving visitors a firsthand look at where Homer became one of America’s foremost 19th-century painters and an esteemed figure in American art. Museum officials unveiled the studio Monday to members of the media and museum supporters.

There are only a small number of studios of famous artists - Andrew Wyeth, Jackson Pollock, Claude Monet and Frederic Church among them - that are open to the public and allow people to experience what the artist experienced in his day, museum director Mark Bessire said.

The Homer studio, located on the Prouts Neck peninsula, 12 miles south of Portland, Maine, is significant because it’s where Homer’s art matured and where he created some of his masterpieces, he said.

Homer was born and raised in Boston and moved to New York as a young man. In his mid-40s, he moved to his family’s estate in Maine and lived in a remodeled carriage house with a second-story balcony and an unobstructed view of the ocean.

Homer was already an accomplished artist, but it was here where he created his well-known works focusing on man versus nature, showing the angry tumultuous ocean crashing against shore and weather-beaten fishermen.

After Homer died, the studio passed down among family members until it was inherited by Homer’s great-grandnephew, Charles “Chip’’ Homer Willauer, who for many years lived in the studio in the summer months. Willauer, 74, was concerned about the future of the building, worried that it would deteriorate over time and be lost to future generations. In 2006, he sold the structure to the Portland Museum of Art for $1.8 million. The museum spent $2.8 million renovating it.

Willauer said he’s thrilled with the finished work and happy he doesn’t have to worry about the future of a building that was instrumental in Homer’s life. But he’s not so sure his great-great-uncle would have understood all the attention.

“I think that Winslow, who liked his privacy, would have been surprised by all the interest,’’ Willauer said outside the studio.

The studio will be open for public tours beginning Tuesday. To celebrate the opening, the museum is presenting an exhibition, “Weatherbeaten: Winslow Homer and Maine,’’ featuring 38 of Homer’s oils, watercolors and etchings that he produced in his studio. The exhibition opened Saturday and runs through Dec. 30.

The museum will offer three tours of the studio a day, 10 people per tour, in the spring and the fall. Tickets are $55 per person and $30 for museum members.