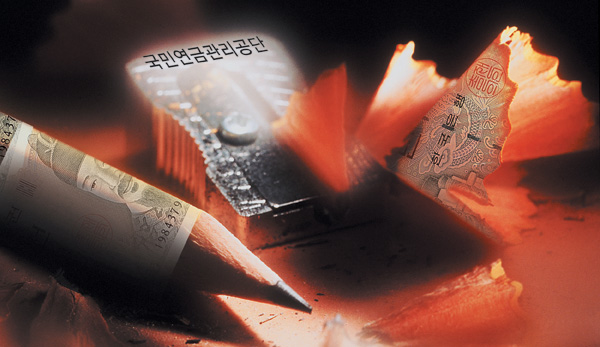 When traveling abroad, most tourists make sure they stop by landmark buildings. The Sony Center in Berlin is one of the main attractions in the German capital, and the owner of the building is Korea’s National Pension Service. The pension fund has also acquired HSBC Group’s head office at 8 Canada Square in London, the landmark Helmsley Building in New York and Aurora Place in Sydney. And to whom does the Korean pension fund belong? The citizens of Korea. Our retirement depends on the national pension fund.

We should not be too complacent with the major real estate purchases. The pension fund, currently at 364 trillion won ($325.4 billion), is expected to grow to 2 quadrillion won by 2040. But the earning rate is the key. When the rate of return falls by 1 percent, the fund will be exhausted five years earlier.

Lately, politicians have been calling for enhanced voting rights on pension funds with the presidential election approaching. A revision of the National Pension Act that requires a recommendation from outside directors and derivative suits has been submitted. Considering the trend toward economic democratization, the strengthened voting right is likely to be granted in a matter of time.

Especially notable investments are acquisitions of stakes in Gatwick Airport in London and Colonial Pipeline in the United States. Colonial Pipeline is the industrial leader delivering 17 percent of petroleum products in the United States. The National Pension was paid a 6 percent dividend last year. Gatwick Airport was suffering from a chronic deficit but turned into a goose that lay golden eggs thanks to soaring demand during the London Olympics. Harvard University economics professor and former U.S. Secretary of the Treasury Lawrence Summers recommends the National Pension Service increase the overseas investment portion from the current 16 percent to 50 percent.

Lately, “investment protectionism” is spreading in the United States and Europe. They are wary of foreign investors interested in airports, harbors and oil refineries. They are especially vigilant against sovereign wealth funds, which prioritize their own strategic interests over market theories. The U.S. Congress rejected the container terminal acquisition by the United Arab Emirates and China’s acquisition of 3Com. New Zealand also stopped the Canada Pension Plan from purchasing the Auckland Airport. The National Pension Service could acquire stakes of Colonial Pipeline and Gatwick Airport because it was recognized as a relatively independent investor.

Even today, the National Pension Fund Operation Committee is under the Ministry of Health and Welfare. The minister of health is the committee chairman, and deputy ministers of economy are on the board.

What will the international market say if the National Pension is swayed by political influence and tries to micromanage corporate operations or control conglomerates? The profitable social overhead capital investment may be affected negatively. The National Pension Service may be prevented from making investments in strategic industries. The politicians need to think about why the national pension has emphasized shadow voting so far.

If the politicians really care about the future, the low-payment, high-payout structure should be revised first. They should not just try to please the voters with sweet rhetoric and neglect the bitter-yet-effective medicine. In order to keep the National Pension Service profitable, its operation should be transparent, independent and left in the hands of specialists. Neither the government nor the politicians own the pension fund. The retirement of every Korean citizen should not be swayed by political influence.