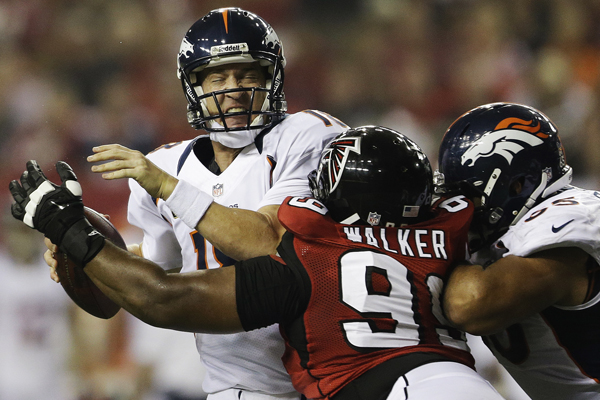 The Atlanta Falcons kept picking them off.

Taking advantage of a stunning three interceptions in the first quarter, Matt Ryan and the Falcons built a big lead and held on for a 27-21 victory over the Denver Broncos on Monday night, an erratic effort by Manning that showed his comeback in the Mile High City is still a work in progress.

Ryan threw the 100th touchdown pass of his career, Roddy White had 102 yards receiving and the Falcons (2-0) made a 20-0 lead stand up, if just barely.

Willis McGahee scored on two two-yard touchdown runs in the fourth quarter to give the Broncos (1-1) late hope. But, on third down, Ryan connected with Julio Jones on a six-yard pass that gave Atlanta a crucial first down with less than two minutes to go.

They managed to run out the clock from there.

For Manning and the Broncos, it’s back to the drawing board.

Even though his velocity is supposed to be nearly the same as it was before four neck surgeries and missing his entire final season in Indianapolis, Manning threw a number of passes that seemed to just hang in the air long enough for the Falcons to step in front of them. Other times, it looked as though he had to put everything he had on the ball to get it where he wanted, even if it wasn’t necessarily a deep route.

He finished 24 of 37 for 241 yards, including a 17-yard touchdown pass to Demaryius Thomas just before halftime.

The only other time Manning was picked off three times in the opening quarter was with the Colts in a 2007 game at San Diego.

Ryan was much more efficient than the four-time MVP, completing 24 of 36 for 219 yards.

He hooked up with Tony Gonzalez for a one-yard touchdown pass in the second quarter, then went to White on a four-yard score in the third quarter.Michael Turner scored Atlanta’s first TD on a one-yard run, the play set up by the first of Manning’s picks.