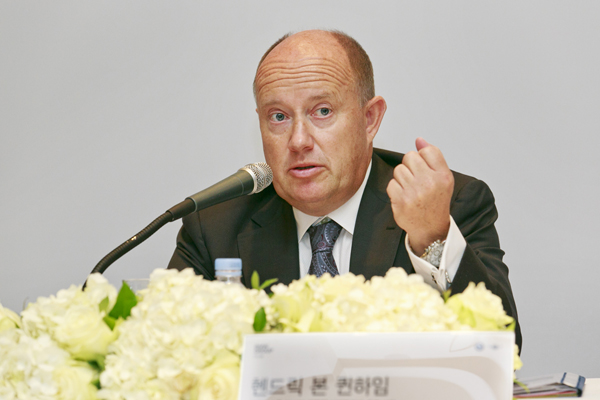 Von Kuenheim is responsible for around 20 countries including Australia, Russia, Malaysia, Thailand, China and Korea, which together account for 12 percent of BMW’s global market. He said the regional market is burgeoning despite the protracted economic crisis.

Kuenheim is the son of Eberhard von Kuenheim, the longest-serving CEO in the group’s history from 1970 to 1993. The current senior VP talked about his father’s business philosophy, which he said he had inherited, as well as BMW’s strategies and competitiveness in Korea.

A. We expect that the market for these regions, currently accounting for 12 percent of [our] total market share, will grow by more than 10 percent [age points]this year on average, while sales of BMW Korea are expected to reach 27,000 vehicles for this year, up from 23,000 last year. We especially expect Russia, which has the fastest-growing car market, to post a 25 percent growth rate alone. South Africa, accounting for the biggest market share of the BMW Group, will also maintain steady growth. I feel very lucky to be in charge of a growing market rather than a declining one.

Korea’s car industry is unique as 70 percent of the market is dominated by domestic brands like Hyundai and Kia. What strategies does BMW have to eat into this?

It is true that Korea has a unique car market compared to other developed countries. Nevertheless, we assume that the market share of imported cars, currently hovering at around 10 percent, will gradually increase to 25 percent, while the market share of Korean cars in Europe will also increase.

Hyundai and Kia have both made remarkable successes domestically and overseas, but they target different segments from BMW, as we concentrate on premium products. We have totally different market segments and brand positions both in Korea and overseas. I haven’t been here for long, but I can see that Korea has great potential for premium luxury automobiles.

Your father turned BMW from a small Bavarian manufacturer into a global player. What did you learn from his way of doing business?

That has to do with openness, fairness and kindness. He would tell me that I should always be kind to people and like communicating with them, if I wish to lead a successful business. He said if there is no affection for people, there is no need to do business, which later greatly affected my customer-oriented management style.

Also, he told me to set clear goals for the company, consider how the company will be remembered, and what it will stand for. Lastly, he told me to defend my position, even if it is not easy to do so. When everyone says yes, I should be able to say no if that is the right thing to do.

BMW has a reputation for making the best cars in history, including its top-notch engineering. We believe that it is the people that make it all possible. Therefore, we put great emphasis on retaining competitive human resources through achieving social responsibility to develop sustainable science and technology.