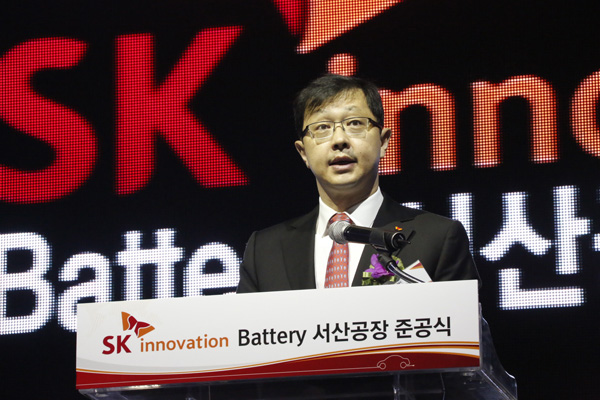 
SK Innovation, the nation’s top refiner, said yesterday it has completed its second plant to produce batteries for electric vehicles (EVs) in a move that heralds its full-fledged entry into the market.

The plant in Seosan, 151 kilometers southwest of Seoul, has an annual capacity of 200-megawatt-hour (MWh) batteries, SK Innovation said.

A megawatt hour is the amount of power used if 1 million watts are used for an hour.

In May 2010, SK Innovation completed its first battery plant with a capacity of 100-MWh batteries per year in Daejeon, 164 kilometers south of Seoul.

SK Innovation plans to double the Seosan plant’s capacity to 600 megawatt-hours by next year and increase its overall battery production capacity to 3 gigawatt-hours in the near future, the company said.

“We are aiming to grab the number one spot in the global EV battery market in 2020 by building battery plants in many parts of the world,” Chey Jae-won, vice chairman of SK Group, said at a dedication ceremony.

As part of efforts to build its presence in the global EV battery market, SK Innovation plans to establish a joint venture with Germany’s leading auto parts company, Continental AG, by the end of the year.

The two companies will invest around 400 billion won ($358 million) over the next five years and run research centers in Berlin and Daejeon.

Along with the production of EV batteries, SK Innovation has been producing lithium-ion battery separators, a key component in EV batteries, since the end of 2005.