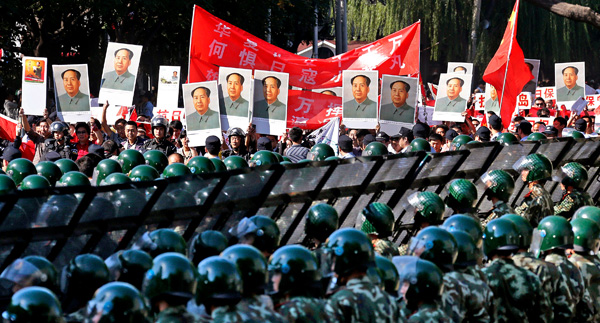 Protesters carry posters of China’s late Chairman Mao Zedong, Chinese national flags and banners as soldiers and policemen stand guard during a protest on the 81st anniversary of Japan’s invasion of China outside the Japanese Embassy in Beijing yesterday. Hundreds of Japanese businesses and the country’s embassy suspended services in China yesterday, expecting further escalation of sometimes violent protests over a territorial dispute between Asia’s two biggest economies.[REUTERS/YONHAP]


Marking the 81st anniversary of the Manchurian Incident yesterday, which sparked Japan’s invasion of China’s northern region in 1931, anti-Japan protests in China reached a peak and tensions between the two countries over territorial claims continued to mount and threaten peace and security in Northeast Asia.

Some 5,000 protesters held a day-long anti-Japan demonstration in front of the Japanese Embassy in Beijing yesterday, more than in any previous day. 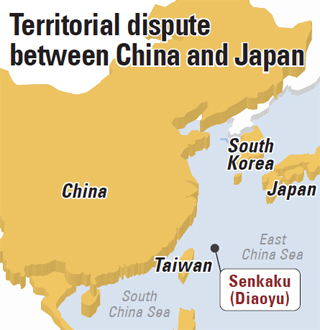 Protestors shouted slogans to boycott Japanese products and food, and the signboards of Japanese restaurants near the embassy were covered by red Chinese flags. Protestors also threw water bottles and eggs over the embassy wall, yelling, “Bombard Japan, China!”

In Shanghai, around 4,000 protesters gathered in front of the Japanese Consulate and criticized Tokyo for recently purchasing three of the five disputed islets from private Japanese landowners.

The islets, which China calls Diaoyu and Japan calls Senkaku, are effectively controlled by Tokyo.

Tension was also fierce yesterday on the water around the disputed islets. Around 1,000 Chinese fishing boats on Monday held protests near the islets. There was no clash with Japan’s Coast Guard.

In front of the Chinese Embassy in Tokyo, five far-right Japanese activists also expressed anger over recent territorial conflict and urged the government to sever diplomatic relations with China.

“Japan feels very insecure about a rising China,” said Willy Lam, professor of history at the Chinese University of Hong Kong. “Tokyo feels that the Chinese will seek revenge for what Japan did to China from the late 19th century onward.”

The disputed islets are rich in gas and other resources. Japan incorporated the islets into its own territory in 1895 after winning the First Sino-Japanese War. Japan claims they were “no man’s islets.”

China and Taiwan, however, have conflicting views. They argue that the islets were marked as belonging to China’s Fujian Province on a map drawn in 1863. 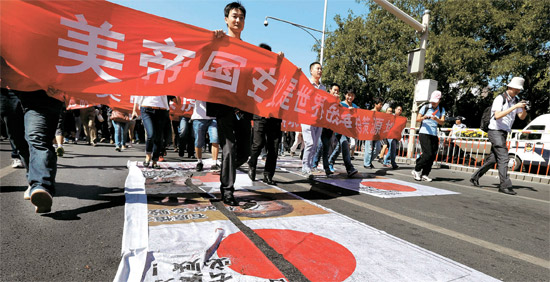 But after the Sino-Japanese War in 1895, the islets were claimed by the Japanese based on the Treaty of Shimonoseki, which ended the war.

Some experts think the area has oil reserves equivalent to those of Iraq, which has 8 percent of the world’s oil deposits.

The conflict between China and Japan is more raucous than that between Seoul and Tokyo over Dokdo, Korea’s easternmost islets, which Tokyo claims as its own territory.

The Ministry of Foreign Affairs and Trade has been monitoring the China-Japan dispute closely with concerns that it may affect the whole region. But there have been no public attacks on Japanese restaurants or car dealers in Korea as in China over the past few days.

Many analysts say the demonstrations in China are controlled by and encouraged by the government or parts of the Chinese leadership. Many demonstrators have been seen taking turns to protest, as if under the direction of officials.

Meanwhile, the United States, concerned over the rising conflict in East Asia, has been calling for peaceful dialogue among the three countries.

Earlier this month, U.S. Secretary of State Hillary Clinton urged East Asian countries to cool down their tensions on the sidelines of the Asia-Pacific Economic Cooperation summit in Vladivostok, Russia.

Following Clinton, U.S. Assistant Secretary of State Kurt Campbell told reporters last week in Washington, “The region is the cockpit of the global economy and the stakes could not be bigger, and the desire is to have all leaders to keep that squarely in mind.”

Also, yesterday, U.S. Secretary of Defense Leon Panetta, who is currently visiting Beijing, met with Chinese Defense Minister Liang Guanglie and urged that China resolve the conflict in a diplomatic and peaceful manner.

Chinese Foreign Ministry spokesman Lei told reporters that its defense minister responded by saying, “China hopes the U.S. will truly abide by the principle of not taking sides over the question of to whom the Diaoyu islands belong.”