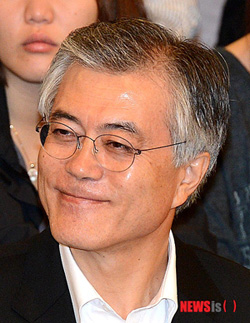 According to Jin, the team is tentatively called the Ivy Planning Group, and it will form the campaign committee and come up with basic strategies.

Jin said there will be no head of the preparation team because Moon wants to get away from the conventional top-down, pyramidal hierarchy. The group will operate with a horizontal structure, she said.

“Moon tried to encapsulate his philosophy of change, already announced in his primary victory acceptance speech on Sunday, as he formed the planning team,” Jin said. “This structure will allow the members to work on equal footing. Each and every one of the members will become the leaves of an ivy vine and surmount a tall wall by working together.”

Representative Noh was a co-chairman of Moon’s primary campaign and his successful management was why he was recruited, Jin said.

Moon also valued Representative Park’s popularity and reform-minded philosophy as well as her strong capabilities to fight against the ruling party.

Former lawmaker Kim was chosen because he has dedicated himself to end the regional schism in Korean politics. Kim ran in Daegu, the stronghold of the Saenuri Party and its presidential candidate Park Geun-hye, in the April 11 legislative election and lost.

Representative Lee, a first-term lawmaker who served as the secretary-general of the YMCA, is known as a godfather of civic activism. His connection with civic groups was his value, Jin said.

Moon will announce additional members of the planning team within a few days.

Jin said with the team’s preparation, the formal campaign committee will be launched before the Chuseok holiday on Sept. 30.

She hinted at the possibility of recruiting well-known liberal figures from outside the party. “I think offers were made to Seoul National University law professor Cho Kuk through many channels,” Jin said.

The announcement came on the eve of liberal darling Ahn Cheol-soo’s press conference today, in which he will announce whether he is running for president.

Speculations is high that Ahn will announce a bid and that Moon and Ahn will come to an understanding in which one of them will be the sole liberal candidate to fight against the conservative icon Park.

Moon’s aides are gearing up for negotiations with Ahn.

“Even if Ahn runs, we will stick with our program,” Yun Kwan-seok, another spokesman of Moon, told Yonhap News Agency yesterday.

“It should be a great competition to maximize the people’s expectations,” he said.

Moon’s associates are sanguine about the DUP candidate’s chance of becoming the sole liberal candidate. Moon scored victories in all 13 rounds of the DUP’s primary.

In a Realmeter poll conducted last week, Moon was leading Ahn by 5 percentage points in a two-way match to become the liberal candidate. Mono Research had another survey on Thursday and Friday, and Moon scored 48.6 percent while Ahn scored 31.8 percent.