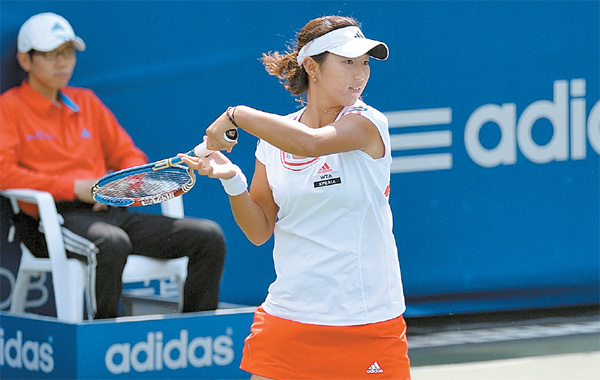 Lee So-ra returns the ball to Russia’s Maria Kirilenko during their first-round match yesterday in the KDB Korea Open at Olympic Park, Seoul. Lee advanced to the second round after the second-seeded Russian called it quits because of a back injury. Provided by the organizer


Lee So-ra became the first Korean tennis player to get past the first round of the KDB Korea Open since the launch of the Women’s Tennis Association-sanctioned event in 2004, but not in the fashion the world’s 468th-ranked player had dreamt of.

Lee’s second-seeded opponent Maria Kirilenko called it quits in the match against the 18-year-old Korean in the first set with the score at 1-1. The 25-year-old Russian, ranked 14th in the world, cited a back injury as the reason for forfeiting.

Kirilenko, the 2008 winner of the event, told a post-match news conference that she had experienced difficulty practicing because of the same injury and felt it was worsening during the match.

Lee is one of three wild-card Korean participants in the event, all of whom are not ranked in the top 200. The other wild-card participants were knocked out in the first round on Tuesday, including Han Sung-hee, Korea’s best hope in the tournament and ranked 264th in the world. She lost to the third-seeded Kaia Kanepi of Estonia 6-1, 6-0.

“Despite the bad condition of her back, [Kirilenko] could send the ball at such a good angle,” Lee told a news conference. “Her serve was also great. I think that being able to return her ball was a good experience for me.”

Lee, however, was confident enough to say that luck comes only if a player has prepared well.

She said she will continue her fight against Tamira Paszek of Austria, ranked 35th, who beat Carla Suarez Navarro of Spain, ranked 45th, 7-6 (8), 6-3.

Kanepi beat Galina Voskoboeva of Kazakhstan in their second-round match yesterday and will play Kiki Bertens of the Netherlands in the quarterfinals. Kanepi, the No. 1 ranked junior in 2001, advanced to the quarterfinals of the French Open in 2008, the first Estonian to do so. She repeated the feat this year. Bertens beat Silvia Soler-Espinosa of Spain yesterday. In another major first-round match yesterday, fourth-seeded Nadia Petrova of Russia, ranked 18th, beat Lourdes Dominguez Lino of Spain 6-2, 6-4.

A total of 24 players in the WTA top 100 entered the 2012 KDB Korea Open for a share of the $500,000 purse. The semifinals will be held on Saturday and the final on Sunday. The event, which initially started as the Hansol Korea Open, changed the banner this year due to a change of the main sponsor.