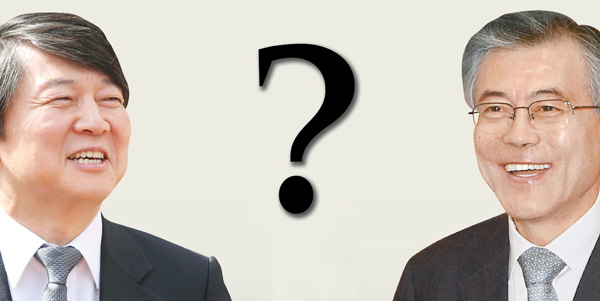 After months of speculation, Ahn Cheol-soo confirmed the worst kept secret in Korean politics - that he would run for the presidency in December. The announcement comes less than 100 days before the presidential election, and finally puts all the players in place.

However, his declaration does little to lift the fog of uncertainty on the presidential election. With the resurgence of Moon Jae-in, Ahn’s claim to be the unified candidate is in doubt, but one thing made abundantly clear in the daily polls of the Asan Institute is that there is little room for both of them in the race - a three-candidate race easily delivers the Blue House to the ruling Saenuri Party candidate Park Geun-Hye. But determining whether it will be Moon or Ahn who takes a back seat should prove to be high political theater.

Moon, now more than ever, appears to be a viable candidate following a spectacular September rise. While on Sept. 8 he trailed Park in a head-to-head poll by 11 percentage points, by Sept. 17 that margin had narrowed to 2 percentage points, well within the margin of error. The argument will certainly be made among progressives that Ahn withdraw and shift his support to Moon, as this would be enough to push him past Park in December.

Further, Moon now enjoys the full backing of the official party apparatus. The party elite are in his corner, and there is likely hostility from this same group towards Ahn as he opted to skip the DUP primary in which he could have done two things at once - win the nomination and also begin the vetting process.

Considering the previous allegations that have surfaced regarding Ahn’s personal life, a virtually unknown candidate is a risk with so little time before the election. The question certain to be circling the DUP is this: “Why should Moon Jae-in be the one to step aside?” After all, he has already gone through the grueling primary process and, due to his previous political experience, comes as a well-vetted candidate.

However, there are several problems with that narrative. First, his support among the party elite does not carry over to the rank-and-file supporters of the DUP. Even though some media outlets have cited Asan’s survey results reporting that Moon (44 percent) is now the preferred progressive candidate over Ahn (37 percent), those results need to be taken with a grain of salt.

Those numbers include all respondents, even those who are supporters of the Saenuri Party. When respondents are limited to those who are supporters of the DUP, preferences are evenly split - 46 percent prefer Ahn while 47 percent prefer Moon. Assuming that Ahn’s decision to enter the race will provide a significant bump in the polls, this further complicates Moon’s claim that has the backing of the voters.

Even if Moon should become the candidate, his path to the Blue House is far from clear. First, his rapid rise in the head-to-head poll against Park Geun-hye will be difficult to maintain. Second, Moon’s core weakness lies in that of the increasingly important independent voters. Among those who self-identify as having no party affiliation, Moon (17 percent) trails Ahn (32 percent) by 15 percentage points. This has been the clearest and most consistent weakness over several months for Moon.

Of course, one proposed solution is for the two candidates to create a unified ticket. In any scenario, it is hard to imagine a ticket that does not place Ahn at the top. Clearly, he does not have the political experience or network to assume the role of prime minister, and may have a difficult time being approved by the National Assembly to assume the post. Further, if he is placed in a lesser role, it risks de-motivating the youth vote, a cohort that will be critical for any progressive candidate to win the December election.

Thus, an Ahn-Moon ticket, as opposed to a Moon-Ahn ticket, seems to give the progressive ticket the best chance to win. Whichever way the DUP takes its ticket, one thing is to be certain - the coming months will provide one of the most interesting elections Korea has ever witnessed.

* The author is a program officer at the Public Opinion Studies Center of the Asan Institute for Policy Studies. Views expressed are his own.