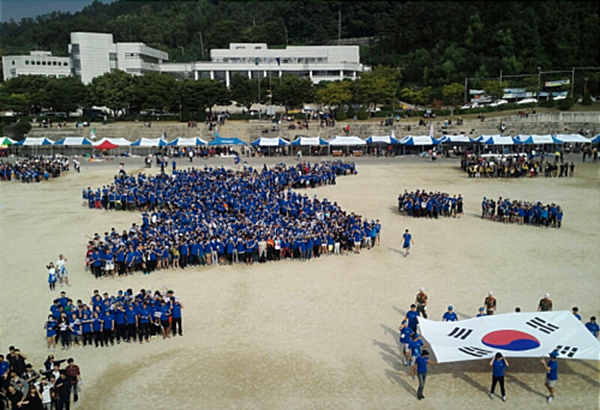 On Sept. 18, singer and activist Kim Jang-hoon took part in a flashmob that formed to depict the Korean peninsula, complete with the islet of Dokdo intact.

More than 3,000 students at Cheongju University took part in the map formation to send a message to Japanese politicians.
Kim had tried to stage a similar event back in May at the school’s yearly festival but the plan was foiled due to lack of participants.

This time around, there was a surplus of attendees and Kim used his Me2Day page to say that he was impressed with the turn out.
“We expected 2,000 but more than 3,000 came,” he said. “I love you Cheongju University!”

He also went on to say to say, “Please take note, Japanese politicians. This is the wrath and the heart of the Korean youth.

“This is how you protest in a peaceful manner, the way a developed country should act.”

Kim has often championed pro-Korean movements, from the claim over the Dokdo islet to restoring justice for Comfort Women — Korean women who were taken as sex slaves by the Japanese military during World War II.