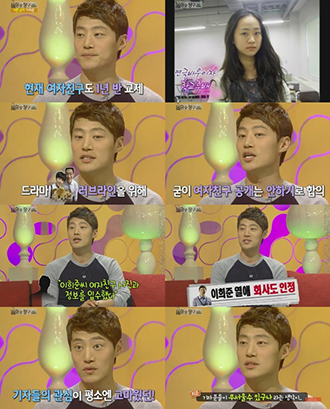 Actor Lee Hee-jun revealed his animosity toward journalists while on the KBS 2TV’s talk show “Win Win” on Sept. 18.

While talking about his one-year relationship with actor Noh Susanna, Lee said that it wasn’t his idea to go public until much later, but the media had other plans.

“Because of the love story in the drama ‘My Husband Got a Family,’ I was told to keep the relationship a secret until the show came to an end,” explained Lee.
“Then I got a phone call from a journalist who said that he would run a story about me and my girlfriend. I asked him to wait until the program ends but a picture of us started circulating online just three minutes after the call.”

After the incident Lee said that his girlfriend had a hard time living an anonymous life and that he also became a little bit fearful of reporters.
“Up until then, I’d always liked attention from media,” said Lee who said that he was just a little bit more cautious now.