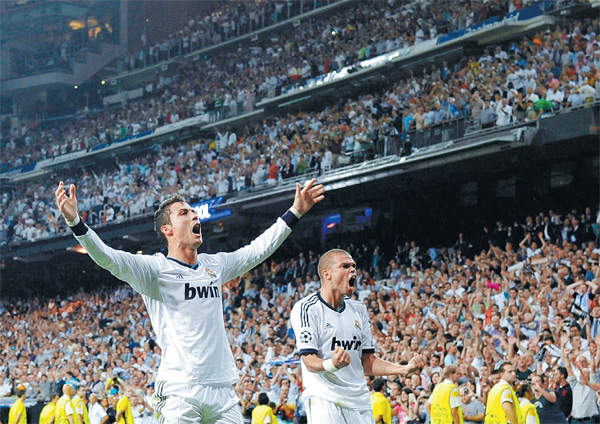 Real Madrid’s Cristiano Ronaldo, left, celebrates with teammate Pepe after scoring against Manchester City during their Champions League Group D football match Tuesday at Santiago Bernabeu Stadium in Madrid. The Spanish club beat the English Premier League side 3-2 to get off to a solid start in its bid to win a 10th European title. [REUTERS/YONHAP]


MADRID - Cristiano Ronaldo may have been down in the dumps recently, but he stepped up when Real Madrid needed him most to snatch an electrifying 3-2 comeback win at home to Manchester City in Champions League Group D on Tuesday.

Arsenal recovered from an early setback and the absence of manager Arsene Wenger from the dugout to ruin Montpellier’s Champions League debut with a 2-1 victory in its opening Group B match on Tuesday.

There were also wins for Paris St Germain, who beat Dynamo Kiev 4-1 in its return to the competition after eight years, newcomers Malaga, who beat Zenit St Petersburg 3-0 and former Champions League holders Porto, who won 2-0 at Dinamo Zagreb.

In a clash of ex-European title winners, Borussia Dortmund beat Ajax Amsterdam 1-0 while seven-time European champions AC Milan was booed off after a 0-0 home draw against Anderlecht.

Jose Mourinho’s side was on the verge of crisis after a dreadful start to La Liga and the Portuguese coach had launched a stinging attack on his players in a bid to stun them into life for their opening game in Europe’s elite club competition.

Ronaldo’s revelation two weeks ago that he was feeling “sad” for professional reasons and his refusal to celebrate goals had not helped, but Mourinho’s rallying call appeared to have the desired effect as Real stormed back to break City hearts.

The English champions were on the verge of pulling off a stunning smash-and-grab raid against the nine-time European champions at the Bernabeu, twice taking the lead in the second half through substitutes Edin Dzeko and Aleksandar Kolarov.

Roared on by fans desperate for a return to winning ways, Real equalized first through Marcelo and then as late as the 87th minute when substitute Karim Benzema stroked the ball into the net just two minutes after Kolarov’s strike.

The stage was set for the world’s most expensive player and Ronaldo danced in from the left and unleashed a powerful shot that flew into the net under City goalkeeper Joe Hart.

The ecstatic Real fans celebrated as if their team had just won the 10th European crown that has eluded them since 2002 and Mourinho, fists pumping, performed a celebratory knee slide onto the pitch from his technical area.

“I celebrate when I have to celebrate,” a jubilant Ronaldo, who has now scored 151 goals in 151 appearances for Real, told Spanish television.

“The match was very important for us and we are back in the fight,” added the Portugal forward, whose Champions League tally of 39 puts him level with former Chelsea striker Didier Drogba.

The clash in the Spanish capital was a contest between Europe’s biggest spenders over the past four seasons and a thrilling encounter lived up to the pre-match hype.

He also handed a debut to defensive midfielder Michael Essien, who joined from Chelsea last month, and left playmakers Mesut Ozil and another new signing, Luka Modric, on the bench.

Real was under pressure to produce a convincing European performance after losing two and drawing one of their opening four La Liga games.