Plugging the gap in an emerging market

Plugging the gap in an emerging market 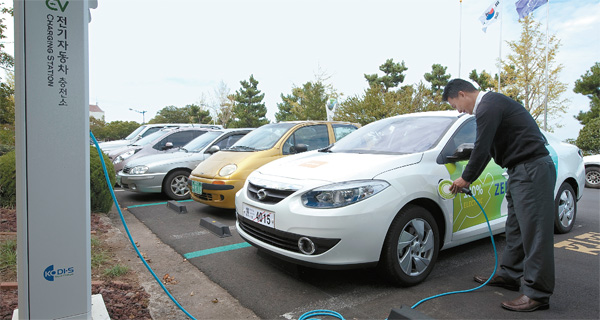 A Renault Samsung Motors Z.E. being charged at a station. [JoongAng Ilbo]


Volkswagen will introduce electric vehicles (EV) to Korea from 2014 and has selected it as one of 18 “strategic countries” for the environmentally and wallet-friendly new business along with the United States, China, Japan and Australia, it said earlier this month.

“Seoul is a mega city, so it has the right conditions for driving electric vehicles and will be a strategic market for us,” Andreas Lassota, the head of e-mobility sales and marketing at Volkswagen?Group, said in Seoul recently.

“We also know that Korea has competitiveness in battery technology.”

Korea is expected to see a rise of EVs in the next few years from both local and foreign automakers, but it remains to be seen whether the public is ready to embrace them on a mass scale.

But from next year, automakers plan to sell to individual customers, prompting the start of real competition in the market. Kia Motors is expected to be the first one to cut the tape for the mass production of EVs. The nation’s second-largest automaker released its Ray EV in December and has already shipped the model to local government offices. It aims to target private buyers in 2013.

The Ray EV is seen as an acceptable and fairly high-speed option for getting around urban areas. It can travel up to 91 kilometers (57 miles) on a single charge - this can take between 25 minutes to six hours depending on the charging device - and has a maximum speed of 130 kilometers per hour (80 miles per hour).

To benefit from entering the market as an early bird, Kia, an affiliate of Hyundai Motor Group, has been cooperating with a capital firm and a rental car company to lure drivers.

Hyundai Capital has introduced a leasing program designed exclusively for the Ray EV, while KT Kumho Rent-a-Car in June launched a short-term rental program for it.

Renault Samsung Motors, the nation’s No. 4 automaker, is also working on the electric-powered SM3 Z.E., which is scheduled to hit the market in the second half of next year. The compact was first unveiled to the public at the Busan Motor Show in April, and the automaker has already supplied 500 units to local governments.

Supported by the technology of French automaker Renault, one of the top guns in the EV business, RSM has been emphasizing that the SM3 Z.E. can travel 30 kilometers further than the Ray EV and hit speeds of up to 182 kilometers.

The carmaker hopes the new direction it is moving in proves a winner with consumers to compensate for its anemic overall sales.

Meanwhile, Korea’s other three carmakers seem to be in less of a hurry.

Hyundai Motor, the No. 1 carmaker in the nation, is set to enter the commercial EV business in 2014 with an electric version of its best-selling Avante. GM Korea, the No. 3 player, is reportedly considering importing its Volt, a plug-in hybrid, from the United States in the near future, and Ssangyong Motor, the smallest local automaker, is developing the e-XIV, a concept EV. The vehicle will be introduced at the Paris Motor Show, which starts today.

Competition is expected to heat up in 2014 when foreign EVs hit the market.

Volkswagen is readying the Golf Blue-e-Motion. It has already developed electric versions of its Passat and Jetta, but decided to go with the Golf, a popular compact-sized hatchback, as its main weapon in Korea.

Its electric motor will be able to generate 115 horsepower and 27.6 kilogram-meters of torque. By drawing on the extra power supplied by its 26.5-kilowatt lithium-ion battery, the car will be able to travel 150 kilometers on a full charge, it said. These specifications are better than those being bandied about by local EV makers.

“Unlike its rivals, the performance of the Golf Blue-e-Motion prototype is the same as that offered by regular Golfs,” said an employee at Volkswagen Korea.

BMW, the nation’s best-selling foreign auto brand, is also set to release its i3 in 2014.

While most carmakers borrow the same platform and design from their existing model, BMW is creating something completely new. It has adopted carbon fiber materials for the body to make the vehicle lighter and faster, which can reportedly get it from zero to 100 kilometers per hour in under eight seconds.

Japanese carmakers are also set to throw their hats in the ring, but not as aggressively as the Germans.

Toyota is testing a plug-in hybrid version of its popular Prius in Jeju, but the vehicle is not yet available for sale as the government has yet to decide whether it legitimately classifies as an EV.

The government began developing and promoting the market for green, as opposed to mean, machines in 2005 after legislating its Green Procurement Law, which is also known as the Act on the Promotion of the Purchase of Environment-Friendly Products.

Back then, the plan focused on the use of hybrids, but since 2010, when the government announced its “strategy for green car development,” the objective has expanded to include other alternative-fuel vehicles (AFV), including EVs.

“California, which is considered a pioneer in terms of eco-friendly cars, will axe hybrids from the list of vehicles it provides state support for in 2018, which suggests that the ‘green car market’ will be subsequently dominated by EVs,” said Park Kyung-chil, who heads the EV team at the Ministry of Environment’s Environmental Transport Division. He added that the government expects to have at least one million EVs on the streets by 2020.

However, others criticize the government for what they perceive as its flip-flopping support for the new business.

The Ministry of Knowledge Economy gives financial support to promising companies in the EV industry to boost their R&D efforts, while the Ministry of Land, Transport and Maritime Affairs inspects the vehicles’ safety. Local governments snap them up and are responsible for establishing EV charging stations with the aid of the central government.

But experts say that having so many players involved in the process makes it inefficient and hampers development.

Some local governments are also backtracking from their plans to enter the market, adding to the general sense of confusion over whether Korea is really committed to going electric.

The Seoul Metropolitan Government announced in June that it will bring at least 10,000 EVs to the city by 2014, but this already represents a 50 percent scale back from its original plan mapped out in July last year. According to its master plan for 2014, Seoul set the target at 30,000 electric-powered cars.

Seoul expects to see demand for EVs, including electric-powered buses, reach 401 units in the capital this year, rising to 1,240 units next year and 8,278 in 2014. But these figures may also be optimistic as only 700 are registered nationwide at present.

The lukewarm attitude of local governments and the wavering policies have already seen interest wane in one project aimed at introducing low-speed EVs to the local market. Called Neighborhood Electric Vehicles (NEV), these can travel at speeds of up to 60 kilometers per hour.

At first, small companies that made golf carts and auto parts rushed to produce them, but due to a lack of government support and a shift of interest to faster EVs and larger corporations, the mini-industry has all but collapsed within two years.

Companies like CT&T and GND Wintech have even delisted from the Kosdaq and shuttered their factories. AD Motors seems to be the only survivor with its Change NEV, but even it has posted an operating loss for three to four years.

“NEVs could never have replaced regular cars, and the government should have been aware of that,” said Bae Hyo-soo a director at the Korea Electric Vehicle Industry Association. “However they could have been redirected to niche markets, such as for tourists or the elderly in retirement villages.” 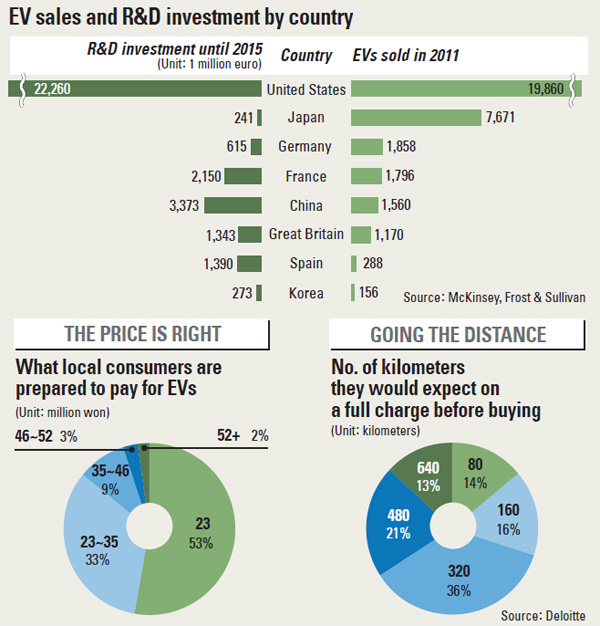 According to a survey of 500 Koreans by Deloitte last year, just over 80 percent expressed an interest in EVs.

But there remains a large discrepancy between consumers’ needs and the current state of the EV industry, as the report showed that over half of them would only buy an EV if it could travel at least 320 kilometers on a single charge.

At present, they can only make it half or one-third this distance.

Most Koreans also consider EV prices too steep, the survey showed, with over half saying they would not be prepared to pay over 23 million won ($21,000).

The Ray EV retails for around 40 million won, but the government has recently begun offering a 15 million won rebate that brings the cost more into the target range.

“For the EV business to succeed here, prices need to go down, driving performances need to be improved and the related infrastructure must be expanded,” said Kwon Sang-sun, the director of RSM’s SM3/EV vehicle development, at a recent conference. “We also need a system where automakers can cooperate and enjoy stronger government support.”

Other sticking points relate to insurance policies and accidents, which have yet to be satisfactorily resolved ahead of mass production, analysts say.

EVs are only slowly making their presence felt in world markets. In the United States, they accounted for less than 1 percent of all car sales last year, with 17,000 units sold. And despite winning the approval of President Barack Obama, GM’s Volt has consistently seen sluggish sales.

Meanwhile, Beijing said in 2009 it would supply 1,000 alternative-fueled vehicles to 10 Chinese cities, but sales have fared poorly.

According to a report by the Korea Trade-Investment Promotion Agency, the city of Shenzhen in Guangdong Province, where Chinese EV maker BYD is located, installed electric chargers in over 2,000 locations, but consumers only bought 400 EVs in the first year.

“But this is the time for companies in the industry to put their heads together and work with the government to map out how to prepare for the coming changes and exploit them.”