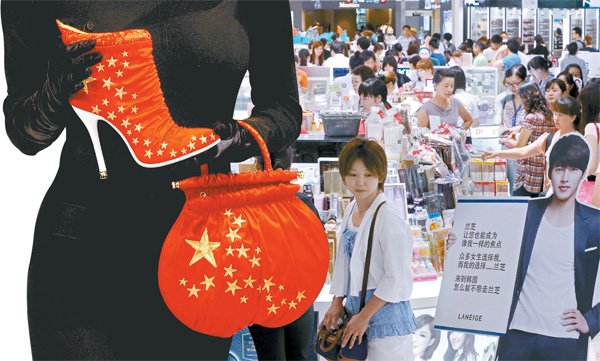 
As trade and tourism with China flourishes, analysts at local brokerage firms see a strong link between the upcoming National Day holiday in the world’s second-largest economy and domestic stocks in such areas as retail, clothing and food and beverage.

The Chinese are getting ready to celebrate one of their longest holidays as the annual mid-autumn festival this year falls on Sept. 30, followed immediately by one of three former “golden weeks” as the nation fetes its founding on Oct. 1, or National Day, with a seven-day long break.

As such, many local companies that sell products and services popular among Chinese tourists - ranging from cosmetics and food and beverages to apparel makers, casinos, travel agencies and retailers - have already seen their stock prices spike in anticipation of a flood of Chinese visitors.

“After tracking the stock movements of 26 companies that make consumer goods which are popular among Chinese visitors for the last three years, I have found their prices begin to jump a month ahead of the Chinese holidays in October,” said Yoon So-jung, a Seoul-based analyst at Shinyoung Securities. “These shares tend to grow by an average 10 percent over the cited period, before dropping back at the end of the holiday.”

Domestic cosmetics and beauty firms saw average growth of 10.36 percent in their stock prices over this month-long period in each of the three years from 2009 to 2011, followed by an 8.48 percent rise for beverage and food shares, 7.84 percent for clothing companies and 7.82 percent for casino operators, he added.

Cosmax, a leading OEM cosmetics maker, is already ahead of the curve this year as its stock jumped 37.16 percent in August, and the imminent arrival of hordes of make-up-buying Chinese in Seoul hot spots such as Myeong-dong, central Seoul, is believed to be a major factor.

Able C&C, which produces the low-cost cosmetics brand Missha, rose in value by 23 percent over the same period. Ditto for Kolma Korea.

“The strong growth of low-cost cosmetics is attributed to two key consumption patterns,” said Yoon. “First, Koreans now prefer cheap cosmetics over imported ones due to the anemic state of the economy. Second, such products are increasingly popular among Chinese shoppers.”

Shim Jae-yeop, an analyst at Shinhan Investment & Securities, picked the end of September and early October as another boom time for stocks related to the burgeoning Chinese inbound tourist market. He said this period leaves local companies even more flush with mainlanders’ cash than in January, when China celebrates Lunar New Year, because Chinese are more likely to travel overseas in fall, whereas they traditionally mark the turn of the year by visiting their parents and relatives in their hometowns.

Statistics by the Korea Tourism Organization back this up.

Agency figures show October to be the third-most-popular month for Chinese to travel to Korea after July and August, when school is out and summer vacations take over.

“The rising stocks reflect investors’ positive anticipation of spiking sales in the third quarter due to the surge in Chinese tourists,” said Shim Jae-yeop, an analyst at Shinhan Investment & Securities.

Tongyang Securities said Chinese tourists spend an average of $1,950 per person during their Korean vacations, compared to mean outlays of $1,343 per person by foreign tourists overall.

“Our research shows that Chinese spend 53 percent [of this sum] on shopping,” said Lee Jae-mahn, an analyst at Tongyang Securities. “Hotels, retailers, cosmetics and clothing makers and casinos are the major beneficiaries.”

“These stocks have already shown strong growth over the last two years between July and September compared to the Kospi’s general movement,” Lee said. “More Chinese tourists are expected to visit Korea in the future as the yuan strengthens and income levels rise.”

However, some analysts warn against trying to reap short-term profits as the stocks can suddenly plunge if they miss this shifting window of opportunity.