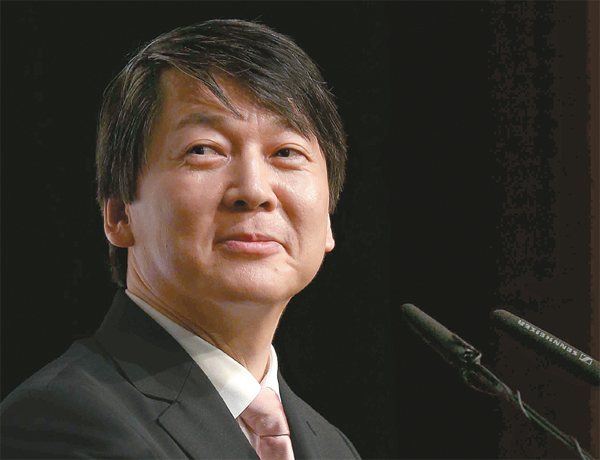 
Liberal independent Ahn Cheol-soo yesterday officially announced a run for the presidency, promising the public a break from conventional politics.

Ending months of guessing about his presidential ambitions, Ahn announced his bid at a press conference televised live by major broadcasters.

The December race now has three prominent candidates, including Park Geun-hye of the Saenuri Party and Moon Jae-in from the Democratic United Party.

“The people have expressed their desire for political reform [through supporting me],” Ahn said. “I am declaring my intention to run in the 18th presidential election to realize that desire. I want to bear the task of our time, which now lies ahead of me.”

With only 90 days left before the Dec. 19 election, Ahn is the strongest third contender for president in the country’s political history. In elections since 1992, politicians or businessmen have created small parties and jumped into the race but had little effect.

Ahn is a rare bid by an independent, and how his candidacy melds or competes with that of Moon of the DUP is the next big question in the race.

Stressing that political reform will start from a rejection of the long tradition of blackmailing and negative campaigning, Ahn proposed meeting his rivals Park and Moon to discuss a policy of goodwill in the campaign and cooperation after the election.

“No matter how hard and tempting it will be, I won’t do the old politics of false propaganda against my rivals,” he said. “And no matter what the outcome will be, I will have my supporters respect the outcome and celebrate it.”

Ahn, a doctor-turned-software-mogul-turned-academic, said he is aware of the concerns that he lacks political experience, but said that is actually his strength.

“I don’t have political experience, organizational support or power, but because of that, I owe nothing,” Ahn said. “I will value the people’s advice and will never give government jobs in a spoils system.”

Ending his announcement with a quote from American-Canadian writer William Gibson - “The future is already here, it’s just not very evenly distributed,” - Ahn urged the people to support him “to prove that good faith can be the strongest power.”

The 50-year-old founder of the software developer AhnLab will have to negotiate with Moon to see which of them will be the single liberal candidate. If both run, they will split the liberal vote and hand the election to Park and the conservatives.

Asked about that process, Ahn said the timing is not right to have the negotiation.

“There are two most important things,” he said. “One is the true change and innovation in the political arena. The second is the people’s agreement with it. Because the two conditions are not met at this time, it is inappropriate to talk about a negotiation to unify the candidacies.”

Asked about the latest controversy surrounding Park’s attitude toward the legacy of her father, former strongman Park Chung Hee, Ahn briefly hesitated but said his rival should face the issue.

“I truly understand her agony as a human being to talk about her father,” he said, “but it is appropriate for her to state her thoughts as a presidential candidate.”

“We welcome that he now declares himself as a politician because he has kept it a secret for a while,” said Representative Lee Cheol-woo, a party spokesman. “He changed his jobs many times but never quit in the middle of one. We expect him to complete the presidential race and become a politician who gives hope to the people.”

The ruling party, however, reacted carefully toward Ahn’s proposal to meet with Park to talk about a race free from political mudslinging.

Representative Lee Sang-il said he will talk about the proposal later and refused to elaborate further.

“I welcome Ahn’s presidential bid,” Moon, the DUP candidate, was quoted as saying by his spokeswoman, Representative Jin Sun-mee. “I will have a good, beautiful competition against him with politics different from the old days. I also want to stress that the change that Ahn talked about can only be possible when the Saenuri Party is stopped from winning another election.” Ahn was a medical doctor, software developer and professor, and it took him just about a year to become a political phenomenon.

Shortly after a TV appearance in June 2009, Ahn, then a professor at the Korea Advanced Institute of Science and Technology, became a national sensation with his critical, yet refreshing views about Korean society and politics. After that, he hosted a series of so-called youth concerts to discuss politics and reform on college campuses. That gave him a huge following among the young.

On the eve of the Seoul mayoral by-election last October, Ahn was rumored to be interested in running. At the last minute, he surprised everyone by supporting a civic activist, Park Won-soon, who won the race.

Ever since, he’s been considered a possible presidential candidate, although in his championing of a new form of politics for the country, he refused to join any political party or go through a presidential primary.

Speculations continued to rise about his presidential ambitions as he announced plans to donate some of his wealth to charity, published a book about his philosophy and made another TV appearance.

Ahn did well in opinion polls and soon became a potential threat to the long-time presidential front-runner Park. In a poll by the JoongAng Ilbo on Sept. 8, 2011, Park won 46.6 percent of the support, while Ahn won 46.3 percent.

With passionate support from voters in their 20s, 30s and 40s, Ahn’s popularity soared, and at the end of November, he was 11.7 percentage points ahead of Park in a poll.

Park, however, recovered popularity by leading her party to win the April 11 legislative elections. Since then, she has maintained the lead in polls of a three-way race in December, while Moon of the DUP and Ahn kept steady popularity as the liberal contenders.

The perennial regionalism of Korean politics also plays an important role in Ahn’s popularity. In the Jeolla region, voters often say that they will support any candidate who can beat Park. In the JoongAng Ilbo’s latest poll conducted on Sept. 7 and 8, Ahn was backed by 70.4 percent in the Jeolla area, while Park was supported by 25.1 percent. In Seoul, Ahn scored 55.5 percent, beating Park by 16 percentage points.

With just three months left before the election, Ahn is expected to face intense scrutiny from both the Saenuri and Democratic United parties. Both parties have already vowed to dig into his past. In recent weeks, some media reports accused Ahn of having lied to the public to stress a clean, transparent image while hiding his past as a wealthy man. He was also accused of having an extramarital love affair, but he flatly denied it.

Although Ahn did not announce his campaign staff at the press conference yesterday, he is already backed by influential figures. Since the end of last year, Ahn contacted elder statesmen and veterans in academia, politics and business.

While many of Ahn’s allies attended the event yesterday, the presence of Lee Hun-Jai, former deputy prime minister for economic affairs, was conspicuous. Speculation rose quickly that he will play a role as a policy advisor in Ahn’s campaign to match the role of Kim Chong-in in Park’s campaign.