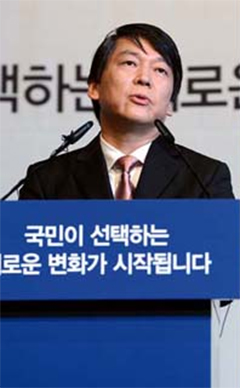 Ahn Cheol-soo, an entrepreneur-turned-professor, said Wednesday that he will run for president, putting an end to long-running speculation about his political ambition, and turning this year's presidential race into a three-way competition.

"People I have met over the past months have expressed desire for political reform. Old politics should be overhauled. I'll run for president," Ahn said in a news conference in Seoul.

The long anticipated move put the 50-year-old founder of AhnLab, the country's largest anti-virus software company, in direct competition with the ruling Saenuri Party's presidential hopeful Park Geun-hye and Moon Jae-in of the Democratic United Party in the run-up to the Dec. 19 presidential election.

In various opinion polls, Park and Ahn have long been running neck-and-neck in a hypothetical two-way race, while Moon, the former chief of staff to the late President Roh Moo-hyun, has rapidly caught up with the two recently. [YONHAP]