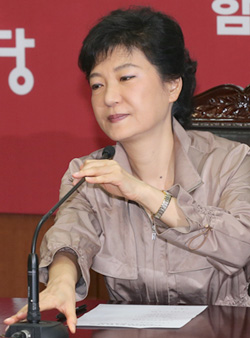 For the first time, Moon Jae-in, the presidential candidate of the largest opposition party, beat his ruling party rival Park Geun-hye in a poll.

In response, the Saenuri Party and the campaign leaders for Park intensified their attacks on the Democratic United Party candidate.

According to a Realmeter survey commissioned by JTBC, which is a sister company of the Korea JoongAng Daily, Moon got the support of 47.1 percent of respondents in a two-way race against Park, who scored 44 percent. The poll was taken on Monday and Tuesday.

Although Moon led within the margin of error, which was plus or minus 2.5 percentage points, it was the first time that he surpassed Park in a two-way match since Realmeter began such polls in July. 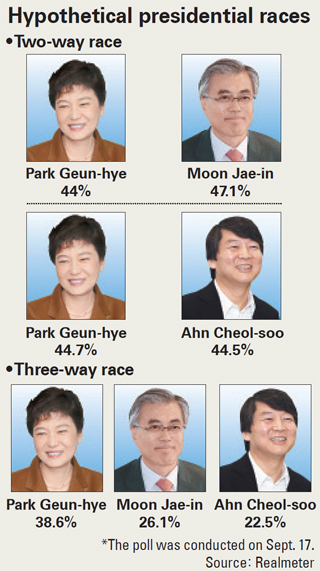 In the race with all three candidates, Park led with 38.6 percent, Moon was second with 26.1 percent, while Ahn came in last with 22.5 percent.

It was also the first time that Moon beat Ahn in the race with all three candidates since July. After Ahn published a book and made a TV appearance, Moon’s rating dropped.

Alarmed by Moon’s rise, the Saenuri Party yesterday intensified its attacks on the DUP candidate, former chief of staff for the late President Roh Moo-hyun.

In an interview with CBS radio yesterday, Kim Chong-in, a key campaign strategist of Park, criticized Moon’s move to make job creation his policy priority. He said Moon was being populist.

“Until now, the DUP said economic democratization was its priority, but Moon changed it and put job creation first,” Kim said. “He appeared to change the priority because public opinion is that jobs are more important.

“There is not a definite solution for the government to actually create jobs,” Kim said. “Other than cutting the number of civil servants and giving those tasks to the private sector, there is no direct way for the government to create jobs. That’s why it is important to create the conditions for job creation. To this end, without economic democratization, job creation won’t be easy.”

Economic democratization is one of the key pledges of Park’s.

“We often say that jobs can be created quickly to lure voters, but the government has no special method of creating jobs instantly,” Kim said. “I am saying that we should be honest when presenting a policy pledge.”

In another interview with BBC radio, Representative Kim Jae-won of the Saenuri Party also criticized Moon for encouraging the country’s ideological divide between conservatives and liberals by demanding Park apologize for the autocratic rule of her father Park Chung Hee.

“Moon said many times during the primary that the elite from the dictatorial era have formed the mainstream force of Korea,” Kim said. “That is factional logic.”

Kim said Moon started differentiating between friends and foes after he won the candidacy, and his image was more gentle in the past.

“I think he made a malicious attack on Park by mentioning her father,” Kim said.

Park Hyo-chong, ethics education professor at Seoul National University, who joined Park’s campaign as a political advisor, also said in an interview with SBS radio that it was low for Moon to use Park’s father the way he has. Moon said Monday he would only pay respects at the grave of the late strongman after Park apologized for her father’s rule.

Sources in the Saenuri Party said the Park campaign will look into Moon’s activities during the Roh administration to hold him accountable for some failures at the time.