From doctor to software mogul to candidate

From doctor to software mogul to candidate 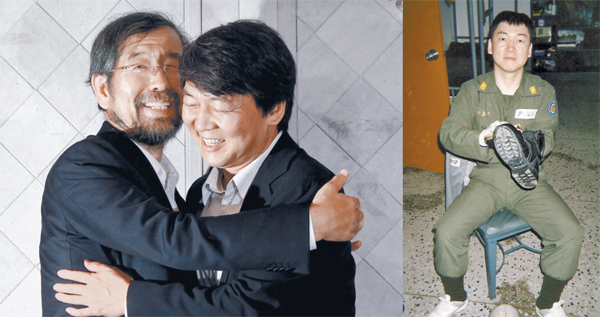 From left: Park Won-soon, left, and Ahn Cheol-soo, right, hug each other after Ahn announced he would give up running for Seoul mayor and support Park at a press conference on Sept. 6, 2011. By Kang Jung-hyun. Ahn shines his combat boots at a military boot camp.


Ahn Cheol-soo, who declared his candidacy for president yesterday, is a latecomer to the political scene. Spending most of his life as a doctor, entrepreneur and professor, it was only last year when speculation grew that the 50-year-old would enter politics.

Pressure began to build during the Seoul mayoral by-election last year, which saw liberal candidate Park Won-soon win easily with the software mogul’s support. Ahn stepped back from calls to run for the prestigious position.

At the time, his approval rating was in the 50 percent range while Park’s hovered around 5 percent. His stepping aside was well received, with the public tiring of old political habits and refreshed by his image of humility.

Two separate polls taken on the day of Ahn’s decision not to run for mayor, both of which simulated a two-way presidential race between Ahn and Park Geun-hye, then a ruling party presidential hopeful, showed Ahn ahead of the conservative.

It was the first time in three years that Park, the daughter of the late President Park Chung Hee, had lost her front-runner position that she had occupied since 2008.

Ahn drew out his decision to run, dropping hints while avoiding the media’s spotlight. His plans are rooted in a long and impressive journey that has taken him from medicine to computer sciences, business and now politics.

Ahn was born in 1962 in Busan as the eldest son of an affluent family. His father, Ahn Young-mo, was a doctor who ran a private hospital in the area. Ahn as a child was very quiet. He was a shy student who hardly spoke and was often bullied by his friends. He spent most of his time alone, reading and playing with chickens and rabbits. Though he was an introvert, Ahn had a natural curiosity about objects. He once tried to incubate a quail egg on a warm blanket. He fell asleep while covering the egg with his body on his bed and the egg broke.

Ahn has said that he would only feel satisfied after he dismantled and dissected objects around him.

“Maybe it was because my dream since I was child was to become a scientist,” Ahn said. 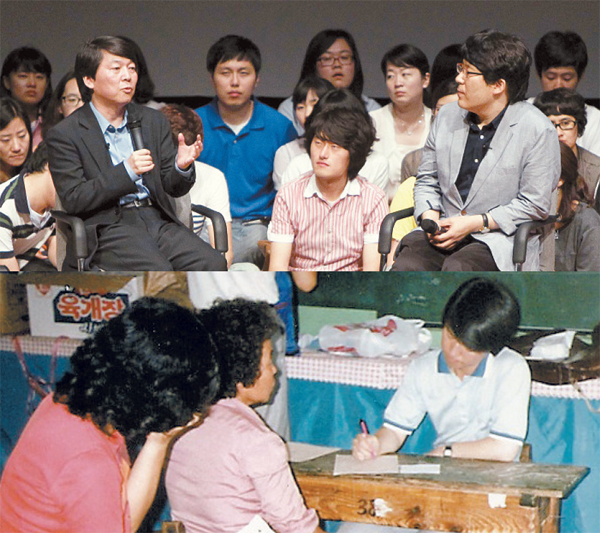 From top: Ahn, left, gives a lecture at a “Youth Concert” at Chungnam National University in April 2011. Ahn, right, treats patients as a volunteer when he was a medical student. [YONHAP]


He was also a bookworm. When he was in sixth grade attending Dongsung Elementary School in Busan, his homeroom teacher called his parents, saying that she thought “Cheol-soo read all 3,000 books shelved in the school library.”

His grades, however, weren’t that high. He hardly got an A or a B. It was only when he entered Busan High School that his grades greatly improved. His intelligence quotient was 145.

Ahn said he had good concentration skills. In high school, he wanted to study engineering at university but said he entered medical school to satisfy his parents. He matriculated at Seoul National University in 1980.

Ahn’s parents have a big influence on the way he thinks and acts. His father opened a hospital in a poor neighborhood in Beomcheon-dong in Busan, rather than in a wealthy area in town. Ahn Young-mo received only half of the medial treatment fees from his patients in the neighborhood.

The hospital was always crowded with people, even more so after Ahn Young-mo treated a newspaper delivery boy at no cost after he was hit by a car.

Ahn’s mother always respected her son, using honorific language. Ahn said he learned how to devote himself to society through his father while his mother taught him to be considerate to others around him.

As a young man, Ahn came across a computer as a medical student at Seoul National University in 1982. His roommate had an Apple computer, and Ahn was fascinated by it. He immediately purchased a computer and studied it every summer and winter vacation.

It was in early 1988 when his life took a fateful turn. His computer was infected by a virus and he tried to cure it by developing a program. After overnight research, he succeeded and developed the world’s first antivirus software. He saved the file on floppy discs and gave them out for free to those in need. Whenever there was a new virus, Ahn developed a fix and spread the codes for seven years.

In 1994, Ahn was offered a position as an assistant medical professor at Seoul National University. He was standing on two uncrossed career paths: One was a doctor healing patients and the other was a doctor fixing computers. Ahn said he “wasn’t able to feel the sense of achievement that he felt while dealing with computers when studying medicine” and gave up 14 years of medical studies.

The following year, the presidential candidate established AhnLab in March. The reality he faced, however, was tougher than he thought. He had no money. For three to four years after he founded the software company, Ahn wasn’t able to pay monthly salaries to his employees.

In 1997, Ahn left the country to study in the United States to learn business management and took care of company business via e-mail. One day, because he worked too hard, he collapsed after suffering from acute hepatitis. He was hospitalized for three months.

AhnLab was able to turn a profit in 1999, four years after establishing the company, when a virus called Chernobyl spread across the country. The company made huge profits that year and in 2001, AhnLab went public.

With his company now in a stable position, Ahn sought new challenges in his life. In 2005, he resigned from his chief executive post and left for the United States with his wife to study. Ahn joined the prestigious Wharton School of the University of Pennsylvania to study business management, and his wife went to Washington State University to study law.

It was in June 2009 that Ahn gained popularity as a professor when he appeared on MBC TV’s “Guru Show.” The episode, highlighting Ahn’s life, gained almost 20 percent of viewer ratings. He became even better known to the public when he started hosting “Youth Concert,” a series of lectures given to university students across the country, together with doctor-turned-investor Park Gyeong-cheol.

At first, they hosted one lecture every month for three years before expanding the number to three lectures per week from May 2011. Young students showed passion toward Ahn’s lectures and a total of 250,000 people participated nationwide as of early September.

At the time when Ahn captured the hearts and minds of a wide group of followers, Korean politics was a mess. In August of last year, conservative Seoul Mayor Oh Se-hoon quit his post after losing a battle against a free school lunch program. There were also accusations that a liberal education chief, Kwak No-hyun, had bribed his fellow liberal rival in return for his withdrawal from the education chief election.

The public expressed concerns and anger over the country’s conservative and liberal factions.

Amid the chaos, Ahn appeared as a fresh figure in politics. And just in time, he expressed ambitions to become mayor, though he would step aside and support Park. Public expectation was still high for Ahn to enter politics, and Ahn responded and showed political moves.

In his book, Ahn wrote, “If there are more people agreeing with me and my thoughts, then I will inevitably run [for the presidency].” And yesterday, he decided that there are in fact more people nodding in agreement.