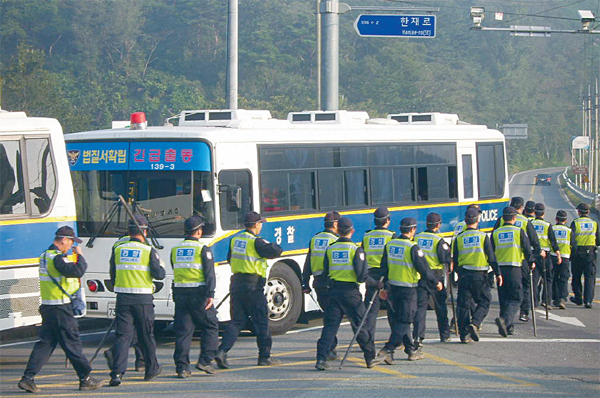 A police search unit of around 350 men begins the second day of a manhunt for fugitive Choi Gap-bok in Cheongdo County, North Gyeongsang. The policemen surrounded expected routes that the 49-year-old fugitive was likely to take yesterday in mountainous areas of the county. [NEWSIS]


DAEGU - Police in Daegu are feeling the heat over a prisoner who escaped from his cell early Monday morning, supposedly by squeezing through a 15-centimeter (5.9-inch) gap in the bars through which food trays were slid into the cell, possibly covering himself in shampoo.

Firstly, despite a major manhunt, police haven’t been able to capture the 49-year-old fugitive, Choi Gap-bok, a career thief and convicted rapist.

Secondly, some people aren’t buying the story about Choi squeezing himself out of his cell and think the police in Daegu’s Dongbu Precinct are covering up some embarrassing truths. The police refuse to release CCTV footage that they say show the 165-centimeter (5-foot, 5-inch), 52-kilogram (115-pound) Choi doing his Houdini act.

The Dongbu police said they are searching around Mount Hwaak and Mount Nam in Cheongdo County, North Gyeongsang. The police have mobilized 438 police officers, including SWAT team members, eight search dogs and two helicopters, but haven’t found a trace of Choi.

Choi has a rap sheet of 25 previous convictions, mostly for theft and burglary. He was convicted of raping a middle school girl in 2008 and released in February.

He was arrested in July by the Daegu police for a robbery and transferred to the Dongbu Police Precinct on Sept. 12 to await trial.

The police set up a checkpoint near Mount Hwaak after they were tipped off around 11 p.m. Monday by a convenience store owner in Cheongdo County that the suspect purchased goods. But he spotted the checkpoint, ditched the stolen car he was driving and disappeared into darkness.

The police said police officers and SWAT team members are searching villages near the mountains and choppers are searching their peaks. For the manhunt, two Belgian Malinois sniffer dogs from the National Police Agency were flown in from Seoul.

“Choi might have moved over to Milyang, South Gyeongsang, after passing through Mount Hwaak,” a spokesman of the Dongbu police told the JoongAng Ilbo.

The police have refused to show the CCTV footage that would confirm exactly how Choi escaped. They insist the footage shows Choi squeezing through the bars of his cell, but they say they don’t want to embarrass the other prisoners in Choi’s cell.

That has raised suspicions that something is being covered up: that the police officers on duty Sunday night might have not locked the cell correctly and Choi might have simply walked out of the station past sleeping guards.

“It could be an international-level disgrace for the police if the CCTV footage is revealed and gets distributed on Internet,” a police officer told the JoongAng Ilbo.