International competition is fierce among countries to be the host country for the United Nation’s Green Climate Fund (GCF) secretariat, because it brings jobs and other economic benefits. Korea is in the competition, but so are Germany, Switzerland, Mexico, Poland and Namibia. 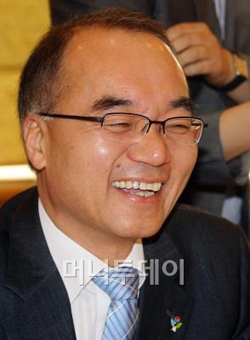 At this point, three cities are considered front-runners: Incheon, Bonn and Geneva.

The GCF, referred to as the environmental sector’s World Bank, was established in 2011 to help fight climate change by funneling money from developed to developing countries. The idea was first brought up in December 2010, when developed countries decided to create a fund to support developing countries in fighting climate change. The total fund to be operated by the GCF in its first year, 2020, will be $100 billion and it will rise to $800 billion in 2027, sources said.

The six countries including Korea believe that being the host nation for the GCF secretariat will create economic benefits worth up to 190 billion won ($161 million) per year. According to Seoul’s Ministry of Foreign Affairs and Trade and the Incheon Metropolitan Office, Korean officials including Song Young-gil, mayor of Incheon, and Son Sung-hwan, the Foreign Ministry’s climate change ambassador, visited Geneva to participate in the very first meeting of the board of the GCF.

Officials were there to promote Incheon as the best city to host the climate secretariat. There is also a private bidding committee led by Han Duk-soo, chairman of the Korea International Trade Association, and a civic committee with 123 people from politics, business and academia.

“If we get to host the GCF secretariat, there will be 500 foreign employees coming to Incheon to work and officials from countries all over the world will visit to get funding from the GCF,” Song said. “This will create 190 billion won worth of economic benefits per year in Incheon alone.”

The Korean government is expected to deliver three messages to the GCF board: that Incheon’s Songdo International Business District is an eco-friendly, low-carbon city; that Korea can be a bridge between developing and developed countries in the field of green growth; and that there is no environment-related international organization in Asia. Germany is promoting the idea that the Secretariat of the United Nations Framework Convention on Climate Change (Unfccc) is located in Bonn.

Geneva is highlighting the fact that it is home to many international organizations, which would provide efficiencies for the GCF. All three countries have offered exceptional incentives such as providing the secretariat with offices and operation subsidies.

The final choice will be made in late November in Doha, Qatar, at the 18th Unfccc conference, where 24 board-member countries will cast votes. Before that, the second board meeting will take place from Oct. 18 to 30 in Incheon.