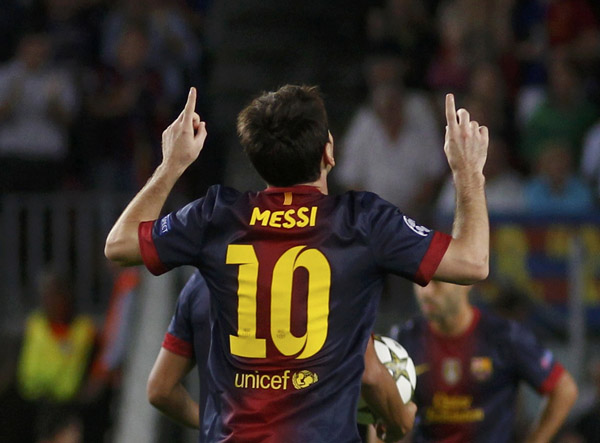 
LONDON - Lionel Messi proved that anything Cristiano Ronaldo can do, he can do better when he struck twice for Barcelona to rescue a 3-2 comeback win for the favorites at home against Spartak Moscow in its Champions League Group G opener on Wednesday.

Ronaldo, hoping to end Messi’s three-year run as World Player of the Year, thrilled the Bernabeu when he snatched a 90th-minute winner in Real Madrid’s 3-2 victory over Manchester City in Group D on Tuesday.

Messi not only netted Barca’s 71st-minute equalizer against the unfancied Russians at the Camp Nou, but also grabbed the winner with a rare header 10 minutes from time.

The Argentina international has been top scorer in Europe’s elite club competition the past four seasons and his latest double took his Champions League goal tally to 53 in 69 appearances while Ronaldo has 39 in 81 matches.

“We deserved to win but it was a really tough game,” Messi told Spanish television.

“It’s not easy when they defend so deep and you can’t find the spaces,” added the 25-year-old, who has now scored 109 goals in his last 100 official matches for Barca.

“They were comfortable defending in their penalty area and they have very strong and quick forwards and can break quickly.

“Things got complicated but we kept pressing and we managed to turn it around.”

Chelsea found a new Champions League hero as Brazilian Oscar scored twice for the holders in a 2-2 draw against Juventus.

Oscar’s first taste of Champions League football since joining from Internacional will linger long after he fired the London club into a 2-0 lead, the second of his goals a rare gem, but Juventus ruined his script, hitting back to earn a point in the Group E opener through Arturo Vidal and Fabio Quagliarella.

Manchester United began its Group H journey with an fairly unconvincing 1-0 victory over Galatasaray but the home jitters that cost it a place in the knockout round last season were evident again as their Turkish opponents were denied by the woodwork three times.

The three-time winners and 2011 finalists failed to reach the knockout rounds last season - the first time since 2005-6 they had fallen in the group stage - and they won just one game at home in a dismal campaign.

The hosts failed to build on Michael Carrick’s early goal and Nani’s 53rd-minute penalty miss added to the nerves.

Nordin Amrabat and Hamit Altintop hit the woodwork for the Istanbul club before halftime while Selcuk Inan shaved the post for the visitors after the break.

“Three points in the opening game are very important, especially when you look at what happened to us last season,” United manager Alex Ferguson, whose side drew at home to Basel and Benfica last season, told Sky Sports.

“We were careless in the first half, it was unusual for us to be so frivolous with the ball,” Ferguson said after overseeing United’s 100th Champions League win.