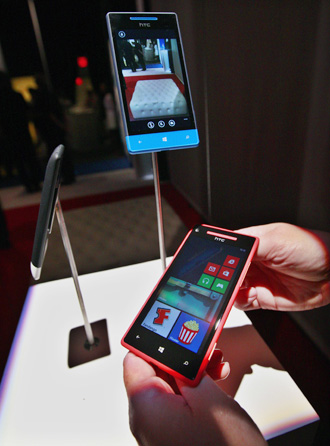 Windows Phone 8X, right, and the Windows Phone 8S models are displayed during their launch event in New York on Wednesday. [REUTERS/YONHAP]

The Windows Phone 8X and 8S sport a new design, better audio and a wide-angle camera, HTC said today in a statement. They will debut in November, said Jason Mackenzie, HTC president of global sales and marketing, and AT&T, Verizon Wireless and T-Mobile USA will sell them in the U.S.

Microsoft, seeking a comeback for its mobile-phone business, is aiming to offer a wider selection of phones for the holiday season. The HTC rollout builds on the introduction of Windows 8 phones earlier this month by Nokia, a close Microsoft partner. HTC’s phones show the Taiwanese company’s strength in hardware and are sleeker than Nokia’s devices, according to research firm CCS Insight.

“Pairing HTC’s beautiful new Windows Phone 8X and 8S with our brand is a big milestone for both companies,” Microsoft CEO Steve Ballmer said today in the statement.

The 8X has a 4.3-inch screen and an eight-megapixel camera, and will be able to use the fastest wireless networks in the U.S., called long-term evolution.

The 8S has a four-inch screen. Both phones come in bright shades like red and blue and include Beats audio technology from Dr. Dre’s Beats Electronics, in which HTC has a stake of about 25 percent.

In the global smartphone market, HTC has lost share to iPhone maker Apple and Samsung Electronics, which unveiled its own Windows Phone 8 handset in August. Even among Windows Phone sellers, HTC, one of Microsoft’s first partners for the revamped Windows Phone, has been surpassed in sales by Nokia, which struck a five-year deal with Microsoft.