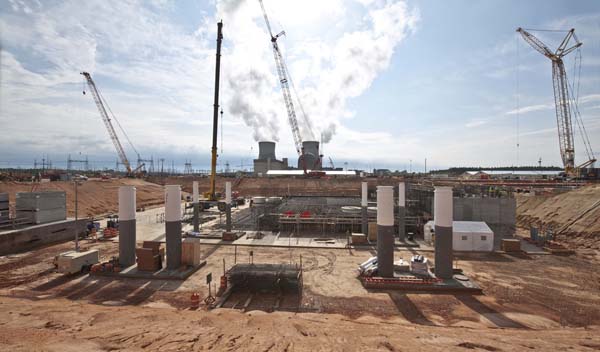 Two new reactors at the Vogtle Electric Generating Plant near Waynesboro, eastern Georgia, are under construction. The outer shells are now being built in Korea. They are due to start commercial operations in 2016 and 2017. Provided by Korea Nuclear Energy Promotion Agency


WAYNESBORO, Georgia - Raging opposition to planned nuclear power plants prompted local authorities to take a delegation of journalists on a tour of an under-construction U.S. power facility this month in a desperate bid to break the deadlock and convince hostile civic interest groups that the words “nuclear” and “safety” can go hand in hand.

“We wanted to see how U.S. operators are succeeding in communicating [their plans] with the public,” said Lee Yoon-dong, assistant director at the Korea Hydro and Nuclear Power Corporation’s (KHNP) communications team.

On Friday, Korea officially named two regions where it will build nuclear plants, reigniting fears of radiation leaks, stoking the ire of local residents and sparking debate about whether such facilities are a safe way of staving off nationwide outages in this power-starved country.

Two days later, the pro-nuclear power camp took another hit when the nation’s Wolseong-1 reactor in Gyeongju, North Gyeongsang, stopped generating electricity due to a malfunctioning generator, hurting its bid to extend its 30-year operating license that expires in November.

With public opposition to the sites already approaching Defcon One, pro-nuclear government agencies decided to fly the print and TV news reporters to Waynesboro, Georgia, for a tour of Plant Vogtle on Sept. 11 to show how safe nuclear facilities can be.

Although far from bulletproof, the gambit was designed to appease angry residents in candidate cities who are proving intractable.

Sept. 11 falls just days before the one-year anniversary of a power blackout in Korea that left swathes of the country blanketed in darkness and factories idled as the summer heat caused energy demand to swamp the national grid.

This, the pro-nuclear voices clamor, shows how crucial it is to get as many reactors up and running in Korea as soon as possible to feed growing electricity demand. Korea plans to finalize a list of more nuclear plant sites in the country in late December.

However, pointing to the tsunami-inspired disaster at Japan’s Fukushima Dai-ichi nuclear power plant in March last year, as well as moves in leading economies like Japan and Germany to eliminate nuclear power in coming decades, local groups are becoming ever-more vocal in their demands to block the move.

Pointing to Plant Vogtle - which was licensed early this year - as a leading example of how nuclear energy can be harnessed without risk when run transparently, the KHNP hopes to change public opinion and win hearts and minds.

As the operator of all of Korea’s nuclear power plants, it has faced the brunt of public anger from residents in Samcheok and Yeongdeok in recent months, where the nuclear plants are set to be built.

Locals have long been aware of the projects as the areas have been under review since March. Communication between the KHNP and local interest groups broke down after the groups began blocking the entrance to information sessions aimed at assuaging fears of the coming plants.

Southern Company, which was granted the license to construct and run new reactors at the already-operating Vogtle complex in February, said it learned the importance of communicating openly with the public on nuclear power matters decades ago.

After the Three Mile Island incident in Pennsylvania in 1979, the most catastrophic nuclear accident in the United States, a failure to allay public fears of radiation set back development of the industry by decades.

“We learn, as an industry, if you aren’t transparent and open, people are going to imagine the worst,” said Cheri Collins, general manager of Southern Company’s nuclear development. “You cannot go after the fact and try to say everything is going to be all right without telling people what they want to hear about nuclear energy.”

The construction license the company was recently awarded was the first issued for a nuclear power plant in the United States since the infamous accident.

Southern Company said it now stresses to the public how its system is “stronger” than the one used in Fukushima, and keeps people updated on how the industry has moved forward and improved since the disaster on its own shores in 1979.

The company said its new reactors use natural forces like gravity or compressed air instead of active machinery like pumps or fans to shut down the facility in the event of an emergency. The automated system drops a cooling water tank from the ceiling onto the reactor to prevent radioactivity leaks. Such a system was not in place in Japan, it said.

The two new plants in Korea will use the same system as the one deployed at Vogtle, although the capacity will be 15 million rather than 11 million megawatts, according to the KHNP.

The agency said Korea, the world’s fifth-largest producer of nuclear power, will press ahead with this energy source as it is more economical than most alternatives.

“Korea needs to increase its production of electricity as it has been fighting power shortages for a while, so it is essential that we try and use the cheapest type of fuel,” said Kim Dae-hee, vice president at the Korea Nuclear Energy Promotion Agency (Konepa). Korea imports 96.5 percent of its energy needs.

One kilowatt of electricity costs 39.1 won ($0.035) when generated from nuclear energy, but the cost shoots up to 67.1 won when powered by coal and 436.5 won when created by solar power, Konepa said.

The local government set a goal of making nuclear-power-generated electricity makes up 59 percent of the total electricity supply by 2030 in its first National Energy Basic Plan, which was announced in 2008. As of last year, the rate stood at 31.1 percent.

“We don’t believe that nuclear is the entire answer,” said Collins. “The approach is to have a balanced portfolio of the energy options to provide safe and affordable electricity.”