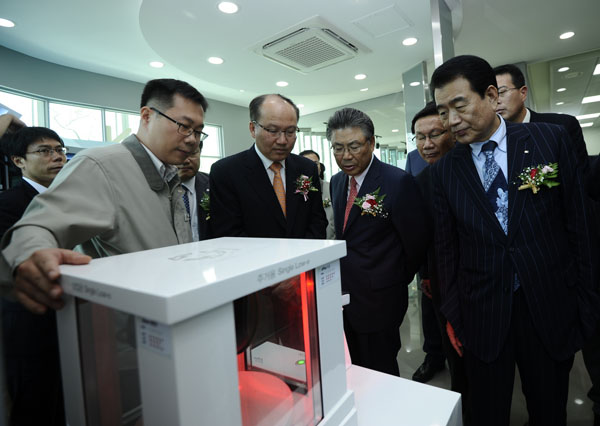 LG Hausys CEO Han Myeung-ho, second from left, and Ulsan City Mayor Park Maeng-woo, third from left, test how much energy is saved by using Low-E glass plates at the company’s new plant in Ulsan yesterday. Provided by the company


ULSAN - LG Hausys has finished constructing the largest plant in the world for energy-saving low-emissivity (Low-E) glass plates, which are frequently used in residential and commercial buildings, the company said yesterday.

With an annual capacity of 10 million square meters (107.64 million square feet), the factory in this southeastern city can churn out enough product to supply all the windows in 100 buildings each with 100 stories.

“We can produce Low-E glass plates at the fastest rate on this, the longest glass-coating line in the world,” said a plant employee, pointing to the assembly line. “But the plant is not yet running at full capacity as the market is still in its infancy.”

Korea’s top window manufacturer invested 100 billion won ($89 million) in the plant in 2010 after it joined hands with Germany’s leading coating glass maker Interpane, which was the first company in the world to develop Low-E. Together, they set up a joint venture called Hausys Interpane.

Low-E glass offers a high level of insulation and is widely used in skyscrapers in advanced countries. In Germany, about 80 percent of windows are made from this eco-friendly material, while the comparable percentage in Korea is significantly lower, or 10 percent.

When the mercury hits 4 degrees Celsius outside, a window that uses this grade of glass can maintain a temperature inside the building of around 24 degrees Celsius (75.2 degrees Fahrenheit), compared to just 10 degrees Celsius for regular glass windows that let much of the heat escape.

LG Hausys CEO Han Myeung-ho believes the domestic market will grow to 260 billion won by 2014, up from 110 billion won at present.

“There is an oversupply of regular glass in the country, but severe shortfalls in the supply of high-quality glass like this,” he said. “Demand will certainly grow when the government implements its energy efficiency labeling and standard program for windows.”

Since July, the government has begun grading energy-guzzling products and ordering that they indicate the result on labels that consumers can easily see. Products that fail to make the fifth, or lowest, grade are prohibited from being manufactured or sold to consumers.