Lutz says Hyundai-Kia may be poised for greater things

Lutz says Hyundai-Kia may be poised for greater things 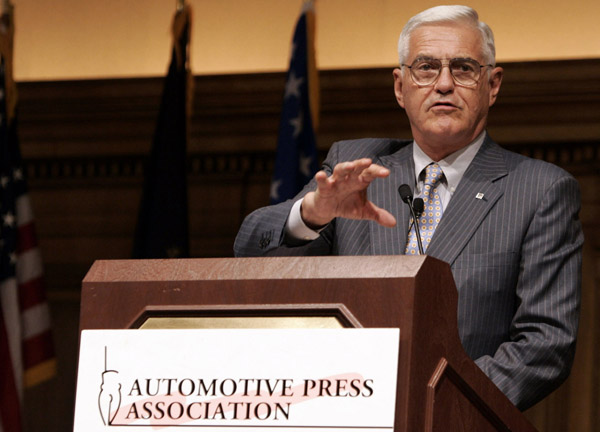 
CHARLOTTE, North Carolina - Bob Lutz, the former vice chairman of General Motors, believes Hyundai and Kia can continue to grow in the global market by fine-tuning their proven strengths, and described their parent company as a role model in terms of the way it is managed.

“I have to say that Hyundai-Kia is the one of the best-run automotive companies today,” Lutz told the Korea JoongAng Daily after his keynote speech on Tuesday at an event dubbed “Mobility Day North America.”

“They have been doing really well,” he said.

Lutz, who has also held senior positions at BMW, Ford and Chrysler to build a resume stacked with over 50 years of experience in the industry, said he is keeping a watchful eye on the rise of Hyundai Motor Group.

The group’s two flagship companies have sold a total of 4.6 million vehicles worldwide this year, an increase of 8.89 percent from 2011.

As a result of anemic domestic market and labor union strike, they have only mustered combined sales of 735,534 units in Korea, however, down 5.82 percent on-year. The deficit has been made up overseas as demand on foreign shores has jumped 12.23 percent so far this year to 3.86 million vehicles.

Hyundai and Kia are looking to achieve annual sales of seven million in 2012, with Hyundai accounting for the lion’s share of 4.29 million.

The 80-year-old car expert, who also helped develop the Dodge Viper and Chevrolet Malibu, said the Korean auto giant has a promising future if it keeps working on its fortes.

“As long as Hyundai maintains its focus on good cars, high customer value and great styling, I think the brand will continue to grow,” said the Swiss-born American, who authored the book, “Car Guys vs. Bean Counters.”

Korea’s top two automakers have shone in Europe recently despite the debt crisis there. While most automakers have seen sales drop off, Hyundai and Kia’s combined market share grew to 6.6 percent last month, according to data from the European Automobile Manufacturers’ Association.

This is the highest share in its history, beating the previous record of 6.3 percent set in June last year.

Lutz, the brains behind GM’s Volt, a plug-in hybrid, stressed that electric cars represent the future of the automotive industry.

“Electrification is real and it’s coming, but I think it’s going to be more gradual than how the media think,” he said. “In 10 years, 10 to 15 percent of cars produced worldwide could be electrically-powered.”

He expressed optimism about the emergence of electric vehicles as lithium-ion battery prices continue to fall, while their storage capacity improves.

“We are going to see a battery type not much bigger than the natural transmission combination of convention automobiles, and reasonably priced, but with a range of 300 to 350 miles,” he said. “The future is electric.”