A series of recent crises continued to rattle the campaign of the Saenuri Party’s presidential candidate, Park Geun-hye, as prominent politicians associated with her face graft allegations.

With only 90 days left until the election, the campaign of the long-time presidential front-runner appears to have stalled while her two liberal rivals enjoy growing popularity. 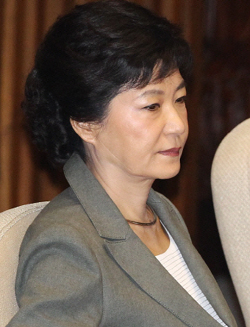 The prosecution raided the home and office of one of Park’s closest aides yesterday.

The Seoul Central District Prosecutors’ Office raided the home and office of Hong Sa-duk, former six-term lawmaker of the Saenuri Party who served twice as Park’s primary campaign chief, on charges of receiving about 60 million won ($53,400) from a businessman before the April 11 legislative elections. The prosecutors also raided offices of the businessman in South Gyeongsang.

While Hong flatly denied the allegation and voluntarily left the Saenuri Party on Tuesday to reduce the impact on Park’s campaign earlier this week, more scandals followed.

The Saenuri Party on Wednesday expelled Song Young-sun, a former two-term lawmaker and a Park loyalist, after a media report linking her to bribery. The Hankyoreh newspaper reported earlier in the day that Song had demanded 150 million won from a businessman, claiming that she needed the money to support Park’s campaign. A transcript of the conversation was quoted in the report. The party held political reform committee and ethics committee meetings and decided to expel Song. It was the strongest punitive action the party can take against a member.

Secretary General Suh Byung-soo admitted the party was suffering from another serious allegation. Another lawmaker also faced an investigation by the prosecution on charges of violating the political funding law. The Suwon District Prosecutors’ Office said it was advised by the National Election Commission in April to launch a probe into Representative Lee Jae-young, a first-term lawmaker of the Saenuri Party. Lee was the head of Park’s patronage group in Gyeonggi. During the April legislative elections, Park supported Lee’s campaign.

Lee was accused of giving gifts to Saenuri officials in order to win his nomination in the election. He was also accused of sending money every month to a driver of a former party chairman since 2009.

Park’s campaign was launched grandly after she won an overwhelming primary victory on Aug. 20. Under the slogan “grand national unity,” her first move was to pay her respects at the graves of the two late, liberal presidents, which went over well with the public. After that, her campaign started to wobble.

After her plan to pay a visit to the memorial foundation of the late labor activist Chun Tae-il was scrapped due to the opposition of Chun’s family, Park faced a string of unforeseen incidents. A legal adviser of rival Ahn Cheol-soo also made public earlier this month an alleged blackmail threat from a member of Park’s campaign team. Park’s vague descriptions of how she sees the legacy of her father, strongman Park Chung Hee, is also an issue that has derailed the campaign over the past weeks.

Park’s campaign is trying to find a way out of the rolling crisis. Some advisers said she should launch a formal nationwide election committee as soon as possible to energize her base.

Others suggested that a special committee be created directly under Park’s oversight to handle her historical perception issue. Some suggested that she should change her approach to the issue soon because Oct. 17 is the 40th anniversary of her father’s controversial self-coup to extend his rule. “Her ambiguous expression of ‘let history be the judge’ is not enough to win the centrists,” said Representative Shim Jae-chul, a member of the Supreme Council.