The United States recently requested that Korea increase its financial contribution to the non-personnel stationing costs (NPSC) of U.S. troops on the peninsula, according to sources at the Ministry of Foreign Affairs and Trade and the Ministry of National Defense yesterday. 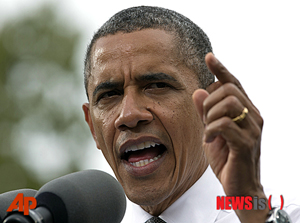 U.S. officials delivered the message to visiting Korean counterparts, requesting an 8-percentage-point increase in Korea’s cost-sharing ratio from the current 42 percent to 50 percent from 2014, sources told the JoongAng Ilbo.

Though official negotiations between Korea and the United States will start next year to determine Korea’s share of NPSC, based on what the U.S. has requested through unofficial channels, the government’s expenditures to support the U.S. Forces in Korea (USFK) are expected to exceed 1 trillion won ($890 million) in 2014 for the first time.

Through negotiations in late 2008, the two countries agreed to increase Korea’s share by 2.6 percentage points to 42 percent from 2009 for five years.

They also agreed to increase the level of financial assistance by up to 4 percentage points until 2013 in accordance with the consumer price index. In 2008, Korea provided 741.5 billion won to the USFK. In 2009, the amount increased to 760 billion won.

In June, the U.S. Congressional Research Service released a report analyzing the Korea-U.S. relationship, which revealed that American defense officials have requested that Korea increase its cost-sharing ratio to at least 50 percent. The report stated that in 2011, Korea contributed 812.5 billion won, or 42 percent of the total cost.

The move is seen as a result of President Barack Obama’s decision early this year to shrink the U.S. defense budget beginning next year. The administration announced that the Pentagon’s budget will be reduced by $500 billion over the next 10 years.

Though pressure is growing on Korea to address the rising costs, the government has yet to come up with a task force to deal the issue.

“The new cost-sharing ratio will be applied from 2014 so the new government should prepare for official talks with the U.S.,” a high-level official said.

Another official from the Foreign Ministry said it is “a difficult issue to deal with” and that it will be a “heavy burden for the government next year.”