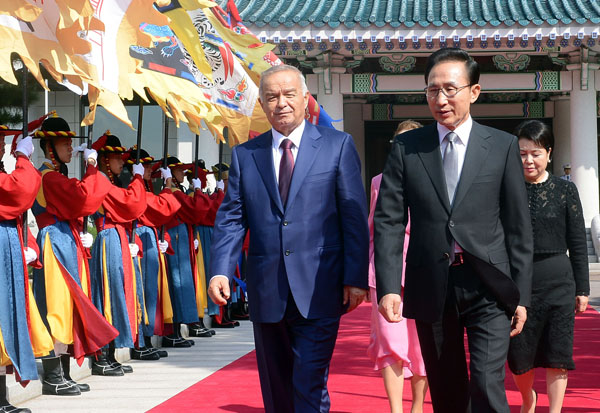 
Leaders of Korea and Uzbekistan agreed yesterday to cooperate further on joint projects including massive energy development programs in the Central Asian nation.

President Lee Myung-bak yesterday met with President Islam Karimov of Uzbekistan and discussed a wide range of issues in a summit held at the Blue House. The two countries celebrated the 20th anniversary of diplomatic ties this year, and Lee and Karimov praised the development of the bilateral relationship over the two decades.

Yesterday’s was the sixth meeting between the two leaders since Lee took office in 2008. They agreed to further deepen the two countries’ strategic partnership, established in 2006, and adopted a joint statement on a wide range of agreements.

Saying that economic cooperation was key to the two countries’ partnership, Lee and Karimov talked about the progress of their largest cooperative projects, the Blue House said in a statement.

The two countries signed deals last year to develop the Surgil gas field near the Aral Sea and build a gas and chemicals plant. At yesterday’s summit, the two leaders expressed satisfaction about the progress and reaffirmed their intentions to further cooperate.

They also discussed Uzbekistan’s special industrial and economic zone in Navoi. According to the joint statement, Uzbekistan praised the support of the Korean government and business community in the project and asked Korean firms to actively participate in the special industrial zone in Angren, near its capital city of Tashkent.

The two leaders also talked about the project of developing Navoi Airport in the southwestern part of the country into a logistics hub to connect Asia and Europe. The two leaders also discussed other cooperative measures including Korea’s support for education, healthcare, communications, technology and agriculture.

On the sidelines of the summit, the two countries signed four agreements: A treaty on judicial assistance for civil and commercial matters between the two countries, a military information exchange agreement, and accords on tourism cooperation and financial supervision assistance.

The agreement between the two countries on the protection of classified military information was similar to the agreement that Korea failed to conclude with Japan recently due to public uproar. Karimov and his wife arrived in Seoul on Wednesday for a three-day state visit. A state dinner was also scheduled to take place last evening.