Cancer deaths down, but some types are killing more

Cancer deaths down, but some types are killing more 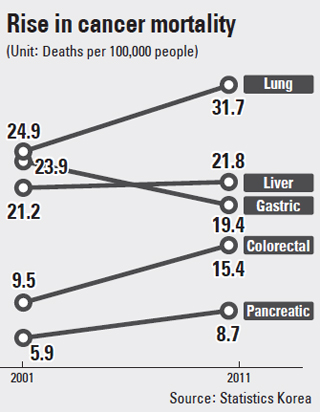 A 68-year-old woman from Ulsan surnamed Hong smoked half a pack of cigarettes every day for 45 years. In 2007, she went to the hospital for incessant coughing and was diagnosed with stage IV cancer. She received treatment for the next four years, but died in August 2011.

The doctors stated, “The main cause of the cancer was from smoking from the age of 23.”

Last year, for the first time since 1998, deaths related to cancer decreased by 1.1 percent from the previous year, according to Statistics Korea. 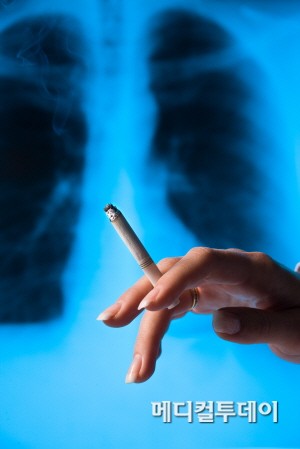 But a more careful analysis of the data showed that the apparent decrease in death by cancer wasn’t a wholly accurate depiction of the situation.

While the total number of deaths from cancer did decrease, in specific types of prevalent cancers such as lung, breast, colon and pancreatic, the mortality rate actually increased.

The JoongAng Ilbo, along with Dr. Park Eun-cheol, a preventative medicine specialist at the Yonsei University College of Medicine, analyzed the data from Statistics Korea, and among the 100,000 people studied, lung cancer actually increased by 1.1 percent and breast cancer by 7.5 percent last year.

“There is such a high number of patients with gastric cancer that the decrease in the number of deaths from this cancer lowered the entire percentage of deaths from cancer last year,” Park said. “We are not in a position to put our guard down after seeing the mortality rates of the other types of cancer.”

The most problematic is lung cancer, the most fatal of the cancers. Over 10 years between 2001 and 2011, the mortality rate increased by 27.1 percent. Last year, the number of deaths due to lung cancer was 15,867, similar to the number of suicides.

A major cause of lung cancer is smoking. “According to research, there are many people who get lung cancer after smoking for 20 to 25 years. The effects of 60-70 percent of male adults in the 1990s [compared to a rate of 44 percent currently] smoking can be seen now,” said Park.

According to Dr. Seo Hong-kwan of the National Cancer Center, “The cause of fatal lung cancer in women is also smoking.”

“The switch to a diet high in meat has contributed to the increase of deaths from colorectal, breast and prostate cancer,” Seo added. “Besides gastric and several other cancers, the advancement in cancer treatment techniques cannot catch up with the increase in cancer patients.”

With early diagnosis and development in treatment methods, mortality in cancers like gastric cancer is on the decline.

Likewise, liver cancer since 2007 has also shown a decrease in the death rate.

Seo said, “In order to decrease the mortality rate from lung cancer, more policies to decrease the rate of smoking, such as an increase in the cost of cigarettes, has to be implemented.”

Cigarettes in Korea are the cheapest among OECD countries.