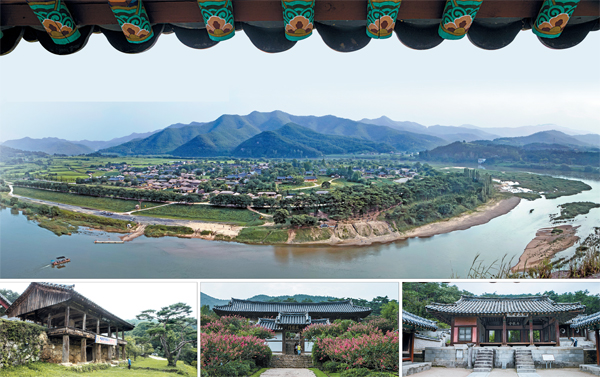 Top: A panoramic view of Andong Hahoe Village across the Nakdong River. Left to right: Red Indian lilacs are in full bloom until end of this month at Byeongsan Seowon; Jeongyodang inside the Dosan Seowon is the national treasure No. 210; A “rabbit trail” connects Kyeongam and Okam pavilions along the Buyong Cliff. [JoongAng Ilbo]


Andong residents boast that their city is the “capital of Korea’s traditional culture.” It has 22 museums and exhibition halls and 45 houses that are hundreds of years old open to the public. It’s considered to be the nation’s center of culture and folk traditions.

Above all, Andong, the largest city in North Gyeongsang, is known for its Mask Dance Festival. This year’s 16th annual festival begins next Friday and runs through Oct. 7. Held in various spots around the city and at Andong Hahoe Village, it is one of Korea’s most popular festivals with foreigners. Last year, 1.1 million visitors attended the festival, 70,000 of them from abroad.

It was broadcast by the Discovery Channel in 2008 and CNN last year, and organizers insist that Andong masks are “Hallyu stars.” This year, the festival has invited performance groups from 11 countries, including Mexico and Russia, for an international flavor.

For those who are thinking of going to the festival, here’s what you can see, eat and experience during your stay in Andong.

The Andong Mask Dance itself is tangible cultural treasure No. 69. The main event of the festival is the parade, where people wear masks (either purchased or homemade) and walk along the cherry blossom trail while dancing to music from loudspeakers. The parade will take place five times during the festival, at 7 p.m. on Sept. 30 and Oct. 2-6. 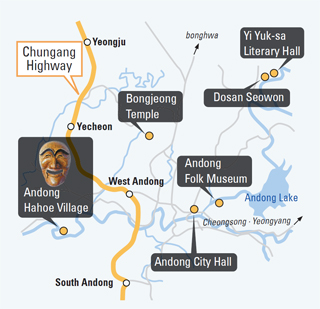 The festival’s fireworks also are a must-see. This year, fireworks are scheduled for Sept. 29 and Oct. 6. According to organizers, it is not a typical “Western style” fireworks show, rather a rope is tied over a 400-meter (1,312-foot) wide river at a height of 64 meters from Buyong Cliff to the Mansong pavilion. Bags made of mulberry roots filled with charcoal are tied to the rope at 30-centimeter intervals and set afire. As the bags burn, flames shoot into the air, creating “Andong-style” fireworks.

There’s also a mask play competition, where more than 500 teams compete each year. Participating teams wear masks they’ve made and can either dance to music or sing. Applications to participate must be received by Tuesday. For more information, visit www.maskdance.com or call (054) 841-6397~8.

To tour Andong, start from the Byeongsan Seowon, a private school. This seowon was originally established by Master Ryu Seong-ryong in the Goryeo Age to teach Confucianism. The Seowon is in a beautiful setting along the Nakdong River with a view of the mountains beyond.

The riverside route from the Byeongsan Seowon to Andong Hahoe Village is considered to be so beautiful that many visitors opt to walk rather than travel by car. It takes about an hour on foot. Andong Hahoe Village was designated as a Unesco World Heritage in 2010 and the Ryu clan has been living there for more than 600 years. Most of the houses are in the old style, with roofs of thatch or red tile. Among 150 households in this village, 67 percent are occupied by members of the Ryu clan, whose most well-known member is actor Ryu Si-won.

Wandering through the village is like walking back in time. The village is the historical home of the noble class and was selected when Queen Elizabeth II visited in 1999 and asked to see the most Korean place in Korea.

It’s a good idea to become acquainted with the history of Andong Hahoe Village before seeing the ancient houses. Korean villages are usually laid out with houses facing south, but scholars in Andong employed a different strategy. Houses belonging to nobles were built in the center of the village, surrounded by peasants’ homes facing north, south, west and east. Hahoe Village is shaped like a boat, and in the center there is a 600-year-old tree, which is said to act like a “sail.” It is where the traditional performance, which is also a highlight of the festival, Hahoe Byeolsingut Talnori, or “Hahoe special ritual drama to the gods,” began. Visitors to the spot are said to make a wish as the tree might grant it.

To get a hands-on experience of living in these ancient homes, you can stay with a village family, but rooms fill up fast at festival time. You’ll have to sleep on a padded mat on a heated floor, but most bathrooms have been “westernized.” Only Japanese tourists can stay overnight at the Damyeonje, the birthplace of Hallyu star Ryu Si-won.

Three main performers of Hahoe Byeolsingut Talnori, or “Hahoe special ritual drama to the gods,” hold the masks for their roles. From left, Kim Oh-jung is a servant; Sohn Yong-ae, who is the only woman performer, is the wife of a scholar; and Kim Jong-heong plays a monk. [JoongAng Ilbo]


Leaving the village, there’s a pine forest called the Mansongjeong, so named because it was said there are 10,000 pine trees in it, a number translated as man in Korean. At the end of the forest there is a sandy beach with small boats bobbing in the sea, creating a postcard view. It’s also a favorite spot for tourists to take pictures. A boat carries visitors across the river, where there are several pavilions and a panoramic view of Andong Hahoe Village.

Andong’s Bongjeong Temple, about a 30-minute drive from City Hall, is a frequently visited spot. It is located on the slopes of Mount Cheongdeung, creating a quiet and tranquil atmosphere. The main hall of the temple is one of the few specimens of Goryeo wooden architecture remaining in Korea. It is also designated as national treasure No. 15. Queen Elizabeth II also saw the temple during her visit in 1999 and placed a stone on a stone tower to make a wish. According to Andong City officials, the queen praised the architecture as a “piece of an old but grand wooden sculpture.” The temple is currently making an effort to be included in the designated list of Unesco World Cultural Heritage sites.

Dosan Seowon is the largest and most famous Confucian academy in the country. The first buildings on the site were constructed in 1561 by Yi Hwang, one of the great Korean Neo-Confucian scholars.

Entering the main gate, there is a one-room Korean traditional house where Yi stayed. According to Andong City officials, the room is so small there would be no space left if two adult men laid side by side. Below the roof of the Jeongyodang, which is used as the main hall, hangs a signboard that is written by Han Seok-bong, a calligrapher for the royal court of Korea.

Dosan Seowon is currently provisionally registered as a Unesco World Heritage site and it may finally become a designated site as early as 2014. 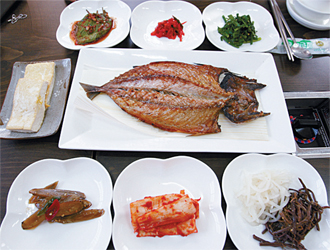 Salted mackerel served with a bowl of rice is one of the local dishes of Andong. [JoongAng Ilbo]

*If you are thinking of staying in Andong overnight, it is recommended that you stay at one of the ancient houses in the Hahoe Village. More information on the 45 different houses offering overnight stays as well as their costs are available at www.gotaek.kr. If you are looking for a traditional Andong-style meal, you’ll enjoy visiting the Pungsan Market, where many restaurants offer local foods such as salted mackerel and Andong jjimdak (spicy steamed chicken). Most meals cost less than 10,000 won ($8.93) per person.

In order to participate in the festival, the organizing committee established a package deal together with a travel agency. By visiting the agency’s homepage (www.tourbaksa.com), you can see different deals that also include an overnight stay at an ancient house. The festival organizing committee also said it will arrange a chartered bus departing from Seoul City Hall to Andong everyday at 6:50 a.m. from Oct. 1 to 7. The bus leaves Andong at 6:30 p.m. every day during the seven days. The bus fare is 17,900 won.