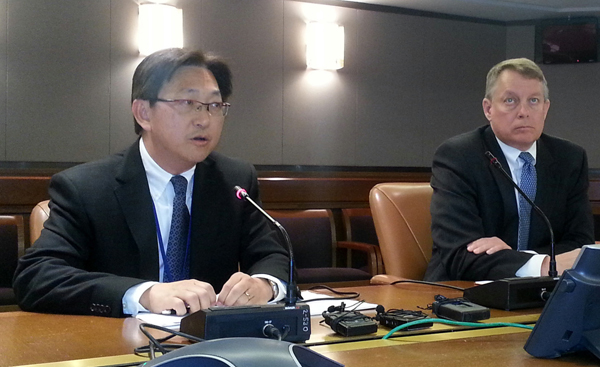 
Korea should continue to support the economy with government spending and low interest rates as growth is set to trail earlier forecasts, the International Monetary Fund said.

The domestic economy will grow 3 percent this year, down from a June forecast of 3.25 percent, the IMF said in a report yesterday.

It expects growth to improve to around 4 percent next year. Earlier in July, the Bank of Korea forecast 3 percent growth for 2012 and 3.8 percent for 2013.

The IMF will probably lower its Korea forecast further when it cuts the global growth outlook in a publication due out Oct. 9, mission chief Khor Hoe-ee said in a conference call yesterday.

“For now, maintaining the currently accommodative monetary policy stance is appropriate given global weakness and heightened uncertainties,” the IMF said in its annual assessment of the country’s economy and policies.

“Fiscal policy should continue to support growth within the constraints of the current budget.”

The central bank unexpectedly cut borrowing costs in July and has since held rates unchanged, opting to preserve policy room in the event of a deeper global slowdown.

The government on Sept. 10 announced economic support measures worth $5.2 billion, including spending and tax benefits to stimulate domestic demand and investment. 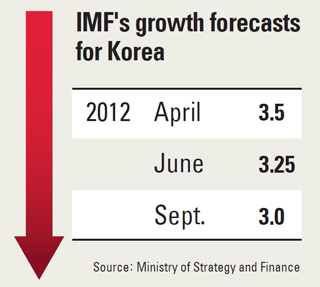 “There’s certainly scope to provide more support for the economy, but precisely whether to cut or not is really a decision for the central bank to make,” Khor, also an assistant director in the Asia and Pacific Department, said on the call when asked whether further interest cuts are needed.

In its report, the IMF said Asia’s fourth-largest economy has “sufficient policy space” to respond to severe downside risks, especially on the fiscal front.

In a baseline scenario of gradual economic recovery, the Bank of Korea should raise interest rates in 2013, it said.

Europe’s debt crisis is capping Korea’s exports, which fell 6.2 percent in August from a year earlier.

The nation’s economy expanded 2.3 percent in the second quarter, the slowest pace since 2009, according to data compiled by Bloomberg.

Inflation moderated to a 12-year-low of 1.2 percent in August.

Asked whether actions by central banks from the U.S. to Japan to buoy their economies may induce a surge in capital inflows for Korea and the need for capital controls, Khor told reporters that there are pros and cons to the situation and that the country’s financial system is more resilient than in the past to withstand such flows.