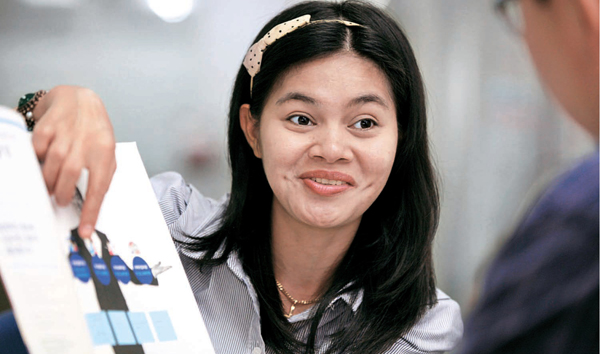 Jessica Torralba Kang explains an insurance policy to a customer at Samsung Fire & Marine’s office in Gimhae, South Gyeongsang. Provided by the company


Jessica Torralba Kang, 33, became the first Filipino insurance agent to be employed in Korea last October. Kang, who came to the country after marrying a local in 2003, previously worked here as an English tutor.

But her life changed after she joined Samsung Fire & Marine, a nonlife insurance company. Today she has roughly 60 clients, most of whom are foreign brides married to Koreans, or foreign workers from China, the Philippines or Sri Lanka.

Although she earned more as an English teacher, she says she now enjoys her work a lot more.

“There are a lot of [foreigners] who have no medical insurance, because they don’t know how to subscribe to a policy, so they just pay in cash when they get involved in a car accident as they have no clue how to handle the situation properly,” Kang said.

Now Kang is at part of the nation’s first insurance team made up exclusively of foreigners. It was launched in July with a total of 38 people fluent in languages such as English, Chinese and Japanese. Of these, eight hail from either the Philippines or China.

The company has also set up a call center for foreigners, and translated nine of the nation’s auto and medical insurance policies into the three aforementioned languages.

Samsung decided to launch a special team for and by foreigners as the market for such clients has been expanding.

As of January, there were 1.4 million foreigners living in the country. In just two years, their numbers have grown by 23 percent, or more than 270,000. Of all expatriates here, 41 percent are foreign workers.

“Whether their wages are high or not, most feel the need to subscribe to auto or medical insurance,” Kwon Soon-cheon, head of Samsung Fire & Marine’s sales development team.

“But either they couldn’t subscribe to such products due to their difficulties in understanding Korean, or because they lacked detailed information about the products.” 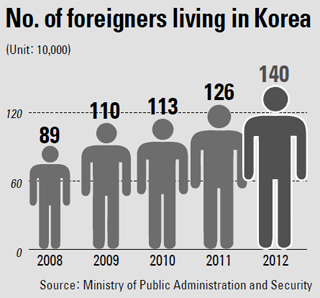 In just two months since the team’s official launch, some of its members make 10 million won ($8,935) a month by selling insurance policies to Chinese laborers at the Anyang Industrial Complex in Gyeonggi.

The company also expects the exclusive team to be of use when it expands overseas by helping to analyze its foreign clients here, as they have distinct preferences.

For example, Chinese clients tend to favor guaranteed policies, or those that cover payments for certain types of damage or loss.

Meanwhile, Japanese are more difficult to approach, unless the insurer is introduced by someone they know.

Although the number of foreigners living in Korea continues to swell, policies and services targeted exclusively for them remain very limited. However, this is starting to change as the financial industry now views this area as a significant growth market.

According to KCB and other local credit rating companies, only 3.4 percent of the foreigners now living in Korea have taken out loans. This is roughly one-tenth of the level of Koreans.

Additionally, while 64 percent of Koreans use locally issued credit cards, only 13.4 percent of foreigners do.

“Financial services for foreigners will become more diversified, expanding into such areas as asset management for high-income clients, and loans and financial education for those who earn lower salaries,” said a researcher at KB Financial Group.