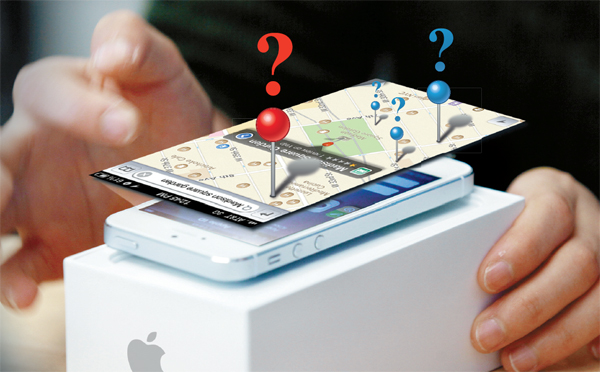 As has been the case in other countries in the last few days, Korean users of the iPhone and iPad who have upgraded to the iOS 6 software are complaining of numerous holes and glitches in Apple’s new mapping application that has replaced Google Maps.

The U.S. smartphone maker released its own Maps app as an integral part of the upgraded operating system on Sept. 12, the same day the iPhone 5 was introduced. But consumers in a number of countries are miffed at what they claim is a lack of accuracy when they search for locations.

Although the latest iPhone has not yet arrived in Korea, owners of previous models can download iOS 6 for free on iTunes.

Some Korean users found that if they type in “Cheongwadae,” or the Blue House, to search for the presidential residence in central Seoul, the app pulls up two different locations: One named “Chengwadae Real Estate” in Incheon and the other called “Cheongwadae Chinese Restaurant” in Yeoksam-dong, southern Seoul.

When searching by address, the app requires the user to misspell the name in English as “Cheonghwadae.”

The new app also fails to recognize the National Assembly, the Supreme Court or the Ministry of Health and Welfare, none of which can be found on the map.

The headquarters of major Korean conglomerates like Samsung Electronics, Hyundai Motor Group and LG Electronics are also nowhere to be found on the map.

“The Apple map shows numerous empty tracts of land in Seoul, so let’s go there and buy it up,” said one post on Naver, the country’s largest portal site.

“I’m an avid fan of Apple, but I’m disappointed with the new Maps app. I’m going to have to switch to maps made by Korean portal companies like Naver and Daum, which are much more accurate,” blogged another iPhone user.

Local users’ sensitivities were first provoked when an early beta version of the app indicated the country’s easternmost islets of Dokdo as Takeshima, using the Japanese name for the fiercely disputed rocky outcroppings in the East Sea.

Apple has spent three years preparing for the new app as Google, which provides Android software for other smartphones, is viewed less as a friend and more as a foe.

Apple has acquired three mapping companies over that period and also drawn on data from Netherlands-based navigation company TomTom to create its mapping service.

In previous versions of iOS, the iPhones’ Maps app was made by Apple but powered by Google’s mapping service.

Apple has, however, added some new features, such as showing 3-D models of buildings in major cities, adding brighter colors and offering a faster zoom-and-pan function.

Users can even ask Siri, iPhone’s voice-powered assistant, for directions, although Siri has also incurred the wrath of many Korean users for its lack of accuracy in terms of both comprehension and delivery.

Critics say that as Apple is a newcomer to the mapping business, it needs to do more homework to provide a better quality service and keep pace with Google.