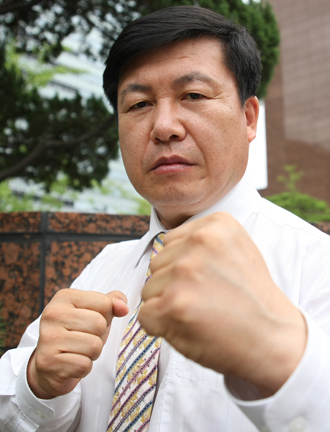 Lee, 50, knocked down the knife-wielding man who tried to flee the scene after the attack with a high kick to his face and chest.

For his act, Lee also received a similar award from the Yeongdeungpo Police Department earlier this month.

Lee said his medal recommendation was made by his former martial arts teacher Kim Yoon-bae.

The 66-year-old Kim is not only the martial arts instructor for the Los Angeles Police Department but also the president of the World Pro Hapkido Federation.

Lee himself is the director general of a martial arts organization, the World X-Impact Federation.

After hearing of Lee’s act, Kim was said to have told the tale to the Los Angeles police commissioner.

The department is said to have been impressed with how Lee faced a person with a knife with his bare hands and awarded Lee because his actions may serve as inspiration.

Because of his busy personal schedule, Lee did not travel to Los Angeles to receive his medal. Instead, his teacher Kim received the award on his behalf.

“I wanted to go but I was held back by two martial arts events, one that ended on Sunday last week and another one scheduled to take place on Thursday of next week,” Lee said.

Another reason he couldn’t travel is because of the injury that he suffered to his left foot when he kicked the 30-year-old attacker.

“My entire left foot is in pain with heavy bruises,” Lee said. “But I haven’t even told my wife [of the injury] as she might force me to stay at a hospital for at least three months.”