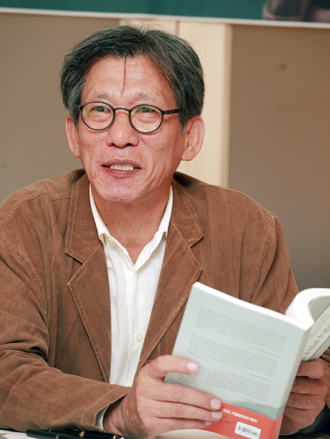 Yoo Hong-joon divides his time between lecturing art history students at Myongji University and authoring “My Explorations of Korean Cultural Heritages,” the nationally known book series that depicts his field investigations into the peninsula’s cultural heritage sites, which have been enjoyed by more than 30 million readers.

He has most recently released his seventh book titled “The Jeju Piece - Where Has the Dolharubang Gone?”

“Unlike my previous book, the seventh has solely been dedicated to Jeju Island,” Yoo said during an exclusive interview with the JoongAng Ilbo earlier this month.

“It can be said that this book was created as a joint collaboration because as well as being given various tips and supervisions prior to my travel, I have also been helped by numerous experts who specialize in [Jeju’s] plants, geology, history, language, roads and folklore.”

When asked about the main reason behind his motivation to conduct a field survey on Jeju island, Yoo said, “I wrote this book in the hopes that a dictionary of the Jeju dialect gets published because at some point in the next 20 to 30 years, it is bound to disappear.”

He said the most memorable sight on the island was the Wahol Bonhyangdang.

“It’s the first place I went to upon arriving on the island to start my field survey. This site is a temple dedicated to the divine power with two 400-year-old hackberry trees resting beside it. For the islanders, it stands as the ‘community center of the spirits.’?”

Yoo says for Jeju’s homeland visitors, the first thing they look for is the Bonhyangdang. The word soji refers to when one expresses a wish while hugging a white paper and then hanging the paper on the temple’s tree.

At first, he thought that it was simply a strange superstition, but as time went on and his knowledge about the island deepened, he realized that this ritual was an essential part of Jeju culture.

For those who are involved in Jeju’s culture of donations, it is a long tradition that upon visiting the Bonhyangdang, these people donate as much as they can.

Even the experienced travel writer had emotional difficulty when he had to write about the 1948 Jeju Uprising.

“How was I supposed to describe it as a ‘democratic resistance’ when the youth were blatantly attacking police stations?” he said. “In the book, I referred to this event as an ‘incident’ because though the police officers should indeed be criticized for their cruelty, really, there aren’t any countries in which police officers keep quiet while they’re being attacked.”

Yoo also brought up some of Jeju’s noteworthy traits and mentioned a few words about the female divers of the island.

“Haenyeo [female divers], who were once the leaders of the island, are now hard to come across, and divers in their 50s are currently referred to as being young. I hope that in one way or another, the experiences and leadership of the female divers get sorted out,” said Yoo.

When asked about his top Jeju spot, Yoo picked the Yeongsil Trail of Mount Halla.