Kim Jong-un gets some new wheels

Kim Jong-un gets some new wheels 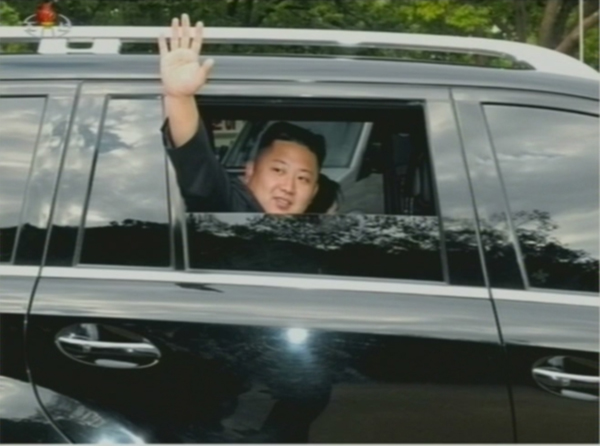 
North Korean leader Kim Jong-un was spotted riding in an unidentified SUV in a TV clip, the first time a leader of the communist has been known to use an SUV.

“A TV clip released by the Pyongyang’s state-run Korean Central Television on Aug. 24 shows Kim riding in a black SUV on his visit to a military unit,” a South Korean government official told the JoongAng Ilbo.

The military unit Kim visited is reported to be a Women’s Artillery Unit stationed on an eastern front along the demilitarized zone under the command of the 4302nd North Korean Army Unit. The women’s unit is nicknamed the “persimmon tree squadron,” after a promise made by Jong-un’s late father Kim Jong-il when he visited it in February 1995. He said at the time that he would come back to revisit the unit when persimmon trees bore fruit in the fall.

He kept his promise.

“This is the first time we’ve seen the use of an SUV by a North Korean leader,” said a government official. “It has been detected that Kim uses Mercedes-Benzes for short-distance travels.”

Government officials assume Kim likes to use SUVs for long distances because of the poor quality of roads in the North. But that could present challenges for intelligence agencies in the South trying to keep track of his movements.

“We were able to determine when Kim Jong-il was about to leave the capital by monitoring his designated trains parked in a special facility near the Pyongyang Station,” said a government official. “But for his son, it’s increasingly more difficult to keep track of his whereabouts.”

The intelligence authorities are also anticipating more hurdles keeping an eye on Kim on overseas trips. They think he may use airplanes and not stick to trains like his father.

Korean and U.S. intelligence could follow Kim Jong-il and his entourage inside a train during a long distance trip through spy satellites.

“In the past, we were able to know whether Kim Jong-il was asleep or presiding over a meeting inside the train,” said a former high-ranking intelligence official. “But if his son uses flights or other kinds of vehicles for trips, it will be much challenging for intelligence officials to have a similar level of access to him.”