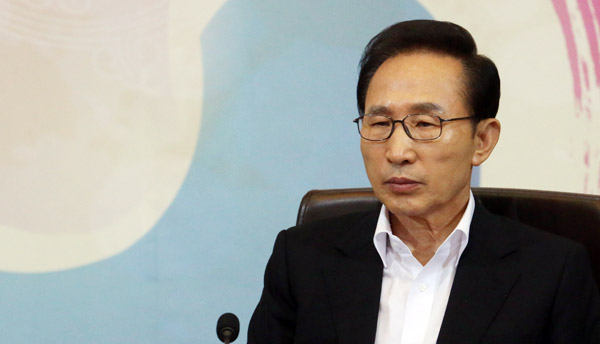 President Lee Myung-bak presides over a cabinet meeting yesterday at the Blue House. At the meeting, Lee decided to endorse an independent counsel bill to investigate his aborted retirement home purchase plan. [YONHAP]


President Lee Myung-bak said he wouldn’t veto the appointment of an independent counsel to investigate whether his aborted plans to build a retirement home were on the up-and-up.

Lee had delayed his decision for several days, wondering whether the National Assembly’s plan, which was passed in a law he could veto, would be politically neutral. He decided to accept the plan after considering current political and economic conditions, according to Choe Geum-nak, senior presidential secretary for public affairs.

He probably also feared a backlash against the ruling Saenuri Party ahead of the presidential election in December if he vetoed the bill.

On Sept. 3, the National Assembly approved a bill to appoint an independent counsel to look into the accusation that large pieces of land were purchased at a discounted price under the name of the president’s son to build a private residence for Lee in his retirement. A large amount of the 5.4 billion won ($4.8 million) purchase price was paid for from state funds through the Presidential Security Service from the Blue House.

Lee aborted the plan after it caused an uproar.

Yesterday was the deadline for Lee to either accept or veto the probe.

But Lee said yesterday that the National Assembly’s bill that authorized the opposition Democratic United Party to recommend special prosecutors is a “political agreement” between it and the Saenuri Party that possibly violates the Constitution. “It is not right to pass a bill to launch an independent counsel on an issue that is based on an accusation by one political party,” he said.

Since the independent counsel system was introduced in 1999, nine special prosecutors have been appointed, all of them recommended by the Korean Bar Association or the Supreme Court chief justice in order to maintain political neutrality.

“In the last administration [of President Roh Moo-hyun], a plan of recommending a special prosecutor upon the recommendation of the National Assembly speaker wasn’t even approved,” Lee was quoted as saying by senior presidential secretary Choe after a cabinet meeting at the Blue House. “It doesn’t make sense that I violated laws to benefit myself for only 100 million to 200 million won because I already have donated all of my belongings to the nation.”

Lee also apologized to the nation for the scandal and promised to fully cooperate with the probe.

“It was a tough decision for the president because the right to recommend two candidates as special prosecutors is held by a particular political party,” Choe told reporters. “We expect the DUP to recommend candidates who can lead the probe fairly.”

The two candidates will be selected from lawyers who have at least 10 years of experience as a judge, prosecutor or lawyer. Attorney Cho Seung-shik, from the law firm The Green, a former judge of the Supreme Court, and several lawyers are being considered as prime candidates. After the DUP recommends the two candidates, Lee will chose the special prosecutor from among them.

In May last year, the Presidential Security Service purchased 2,600 square meters (28,000 square feet) in Naegok-dong, Seocho District, worth 5.4 billion won for the president’s retirement home and security facilities. Of the total, 463 square meters of the plot were bought in the name of the president’s son.

The president’s son paid 1.12 billion won of the 5.4 billion won. The rest of the money was taxpayer money. It was suspected that the son might have paid less than his share and the taxpayers paid more. The president is also suspected of violating the country’s real estate law, which says that land must be purchased in the real name of an owner.