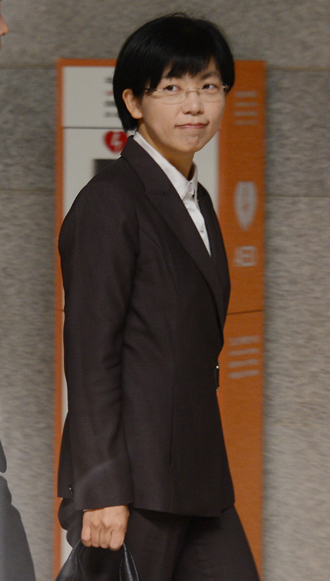 Lee Jung-hee, former co-chairwoman of the withering Unified Progressive Party, was summoned by prosecutors yesterday over her alleged involvement in the manipulation of voter survey results ahead of the April 11 general elections.

The disgraced former leader of the leftist party arrived at the Seoul Central District Prosecutors’ Office in Seocho District, southern Seoul, at 10 a.m. yesterday to be questioned.

“This is a politically motivated suppression of the UPP and myself ahead of the presidential elections,” claimed Lee. “These unjustified political acts must immediately stop.”

When asked if she believed her aides did not commit any legal violations, Lee nodded.

Members of the schism-torn party’s largest faction were seen escorting Lee to the prosecutors’ office yesterday. That faction now has control over the party after the smaller faction defected over the past few weeks, fallout from the alleged rigging by the largest faction of a primary for proportional representatives in March.

UPP spokesman Min Byung-ryul and Representative Kim Jae-yeon, who has been accused of winning a proportional seat through a rigged survey, accompanied Lee.

The prosecutors’ questioning of Lee lasted around five hours and ended around 3 p.m.

“I exercised my right to remain silent, which is guaranteed by the Constitution,” Lee said as she was leaving the prosecutors’ office.

The investigators reportedly questioned the 43-year-old Lee about whether she was aware of attempts by her aides to rig the primary results and also if she masterminded the rigging.

In a previous questioning by police on the alleged charges last month, Lee also remained silent and was sent home after two hours of questioning.

Investigators indicted four members of the UPP earlier this month on charges of manipulating the results of opinion polls to help Lee clinch a candidacy for Gwanak B District, southern Seoul.

The UPP and the larger Democratic United Party agreed to field single candidates for the April general election based on who did better in public opinion polls.

The four indicted UPP members allegedly sent hundreds of mobile phone text messages to party supporters urging them to lie about their ages in order for them to cast double votes for Lee during the March primary.

Lee won the candidacy in Gwanak B District by defeating Kim Hee-chull of the DUP but dropped out of the race following disclosures that her aides tried to rig the surveys.

The former co-chair of the embattled party resigned from her leadership post in May to take responsibility for other survey frauds allegedly engineered by her party members.

The authorities are going to decide what legal action they will take against Lee early next week after reviewing information and testimonies from Lee’s indicted aides and UPP members.