A civic group representing enslaved sex workers during Japan’s colonial rule in Korea has been fined for launching an unauthorized protest with North Korea.

“We were notified on Wednesday by the Unification Ministry that they have decided to impose a fine of 500,000 won ($446.8) because we released a joint statement with the North without prior permission,” said Yoon Mee-hyang, a co-representative of the Korean Council for the Women Drafted for Military Sexual Slavery by Japan. 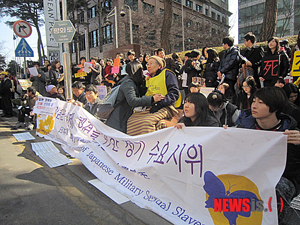 The decision by the Unification Ministry, which handles inter-Korean issues, came after the civic group released an anti-Japan statement jointly with a North Korean civic group supporting so-called “comfort women” during the local group’s regular Wednesday rally on Aug. 15 in front of the Japanese embassy in central Seoul.

In the statement, the South and North groups demand Japan apologize for its colonial rule of the Korean Peninsula and the sexual enslavement of Korean women, as well as withdraw the country’s push to sign a military information sharing pact with South Korea.

The local group tried to file a prior report of the protest after getting a faxed proposal for the joint statement from the North, but “the Unification Ministry refused to accept the report, citing rejection of the South Korea-Japan military information pact included in the statement,” Yoon said.

According to the inter-Korean exchange law, the ministry is allowed to refuse a report of South Koreans contacting North Koreans in case the contact is feared to threaten the public welfare in South Korea or South-North relations.