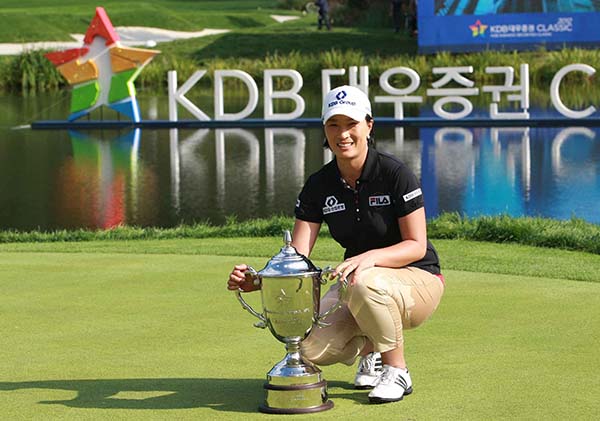 
Pak Se-ri has seen her name written in headlines throughout her career, but recently the press has come when up-and-coming Korean golfers mention her as a role model for success during interviews.

They would cite Pak’s barefooted victory at the U.S. Women’s Open 12 years ago as an exemplary performance to emulate in launching their own LPGA careers. They refer to her 25 LPGA career victories as a number to reach - as if that were her final total; as if the 34-year-old golfer who trailblazed success of Koreans in the international golf already retired.

Pak showed that she is still a formidable player on the golf course by winning a KLPGA event against over 107 other Koreans including top rankers on the KLPGA and LPGA tours.

Pak carded nine birdies and two bogeys in the final third round of the 600 million won ($537,153) KDB Daewoo Securities Classic for the combined 16-under 200. Heo Yoon-kyung finished runner-up three strokes behind, rising to No. 2 in the earnings ranking on the KLPGA.

“I have attended a domestic event once or twice a year and I don’t remember when was the last time I won one,” a teary Pak told a press conference after yesterday’s victory. It was her eighth victory on the KLPGA Tour and her first since winning the MBC X-Canvas Open in May 2003.

Pak has long struggled to find her form early on. Her multiple number of victories on the LPGA Tour stopped with three titles in 2003, and she managed to win four other LPGAs in the following nine years. Her last victory on the LPGA Tour was at the Bell Micro LPGA Classic in May 2010, which followed the Jamie Farr Owens Corning Classic in 2007.

Pak said that her rhythm and sense is coming back since early this season, thanks to the training in the previous winter she had with her father. Pak said her father checked her basic skills such as her grip, stance and swing during the training.

“I’ve got confidence from winning a domestic event and I would like to play the rest of the season on the LPGA Tour with a more comfortable mindset,” she said.

Following in Pak’s footsteps, many Korean women have built successful careers on the LPGA Tour. This year, Koreans have won seven LPGA events including three of the four majors.

Golf will debut on the Olympic stage at the Rio de Janeiro Olympics in 2016 and many young Korean golfers are already aiming to play for their country. Pak, who will be 38 at the 2016 Olympics, said she will yield the honor to her juniors.