Revisiting the women who changed Korea with their pens

Revisiting the women who changed Korea with their pens 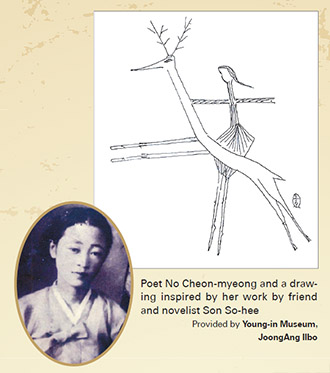 “It was a fight in which there was no victor,” Park Kyung-ni (1926-2008) wrote in the preface of her famous novel “Toji” (“The Land”). “Just like the army that burns its bridges, only by shouldering despair was I able to take a step forward.”

Park was one of the most prominent Korean novelists and “Toji,” a 16-volume epic saga set in the turbulent late 19th and early 20th centuries, is a must-read for those interested in the Far East. The words in the preface show the agony and torment she went through to complete it.

Writing a novel is an extraordinary accomplishment in any environment, but attempting to convey the pains at the turn of the 20th century in Korea and life under Japanese rule was an especially difficult task given the rapid changes on the peninsula. Park was also balancing life as a mother, wife and daughter-in-law in a very patriarchal, Confucian society.

She was not alone in her remarkable attempts to break free from societal constraints. Museums and historians are beginning to rediscover the female literati of the dawn of modern times on the Korean Peninsula, revisiting the professional works and narratives of Park’s contemporaries.

An exhibition titled “Korean Women’s Literature, 30 Years” is currently underway at the Young-in Literary Museum in Pyeongchang-dong, central Seoul, which looks into the lives of 13 female writers in Korea who pioneered modern literature on the peninsula. In addition to Park, the exhibit centers on Na Hye-seok, who was born in 1896, and Kim Nam-jo, who was born in 1927.

Na and Kim Il-yeop, who were prolific in the 1920s, are part of the first generation of modern Korean authors. They were followed by Mo Yun-suk, Choi Jeong-hee and No Cheon-myeong, who were primarily active in the 1930s. Han Mu-suk, Son So-hee and Kang Shin-jae were prominent in the 1940s and Kim Nam-jo and Park Kyung-ni in the 1950s.

During the early 20th century, many women sought to break away from Confucius restraints and looked for a footing in society. To many of these authors, writing was a symbol of freedom.

The pen and the sewing machine

A common theme at the exhibition is the balancing of a passion for literature with life as a mother and a wife. Many of these influential authors had a pen in one hand and a sewing machine in the other - quite literally.

On display are the contemporary household items used by many of the women, like the tables, paper, pens and inkstones as well as the sewing machines, spools, bowls and hanbok, or traditional Korean attire.

Personal letters are also on display at the exhibit.

“Dear Ik-jo, I just received your letter. I am so thrilled that I instantly stopped writing the novel and am writing to you now. Thank you also for copying down the report card. It seems you are not so good at physics, geometry or algebra. I was also bad at those. You must have taken that after me.”

Novelist Choi Jeong-hee (1906-1990) was writing to her son in 1952. Choi was married and had the son with her husband, but became a widow not long after. She had to leave her son at her in-laws, and letters were the only way she could keep in touch and express her love.

Photos at the exhibit show that many of these writers knew of each other and even met on a few occasions. “?‘Come on in, girls. You are a little late,’ No Cheon-myeong greeted us in a little nasal voice with a big smile. I forgot where her house was. But it wasn’t a small one, with two large rooms on the ground floor and a second level. We chatted like teenage girls on a school retreat.”

This is the account of novelist Son So-hee (1917-87) on a visit to the home of No (1911-57). The article was published in a literature magazine in 1979. No is known for the poem “Deer,” which starts with the well-known phrase “Dear an animal that’s sad because of its long neck.”

In the article about her visit, Son drew a slender girl in a dress riding a large deer and wrote on the side, “No was a sad poet because of her lofty ideals, and she was a lonely woman because she had a tender heart.”

From Cinderella to destitution

Among the female literati of the times, Na Hye-seok had it the hardest.

She held her first solo exhibition in Seoul at the age of 25 and married lawyer and diplomat Kim U-yeong and traveled the world with him. But she challenged the culture of tolerating men’s affairs and concubines. She had an affair of her own and got divorced in 1931.

Na struggled financially and became ill. She was found dead on a street in 1948 and was kept at a hospital morgue until she was identified as Na, Korea’s first Western-style painter and a respected writer.

Beside the exhibition at the Young-in Literary Museum, a group of scholars launched on Sept. 1 the Na Hye-seok Research Society, which will be dedicated to studying the works and life of Na. In addition, the city of Suwon, Gyeonggi - where Na lived - is building a memorial hall for the late artist, hoping to complete it late next year.

At the general meeting held to celebrate the launch of the society, scholars - including Seo Jeong-ja, professor of Korean literature at Chodang University - unveiled never-before-seen photos and letters.

In one letter, dated Nov. 29, 1931, Na writes to her Japanese patrons, asking them to purchase one of her paintings that won an award in Tokyo, which indicates how financially difficult it was for her after the divorce.

“I always envisioned making a map for the 30 years of female literature [between the 1920s and 1950s], but the lack of materials has been a problem,” said Kang In-suk, the director of the museum. “We were able to expand our collection thanks to some new donors like the daughter of Mo Yun-suk, who lives in Canada, and Song Yeong-sun [a scholar of Korean literature].”